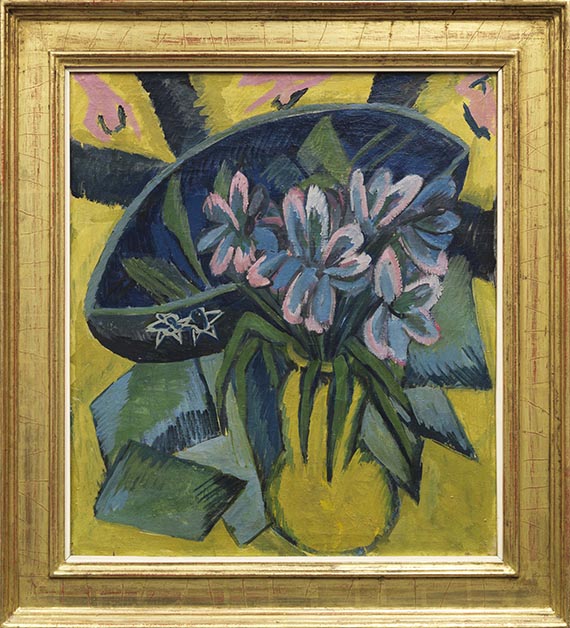 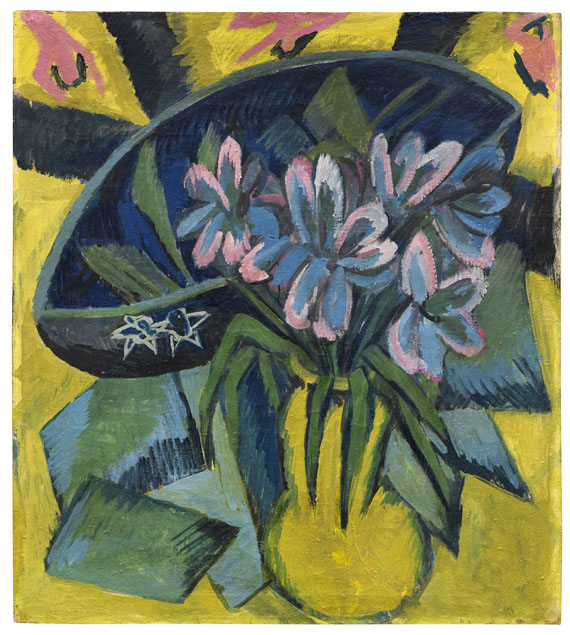 • Rediscovered: With the to date unknown portrait of the author Simon Guttmann (1912) on the reverse.
• From the sought-after Berlin period.
• Notable provenance: Collection Henry van de Velde and later Mary & Leigh Block, Chicago.
• Shown in several exhibitions during the artist's lifetime.
• Not offered on the auction market for more than fifty years.
• The architect E. L. Kirchner unites top and frontal view in a fascinating composition.
• Other still lifes by the artist are in possession of, among others, the Metropolitan Museum in New York, the Aichi Prefectural Museum of Art in Nagoya/Japan, the Von der Heydt-Museums in Wuppertal and the Museum Ludwig in Cologne.

The work is documented in the Ernst Ludwig Kirchner Archive, Wichtrach/Bern.

Retreat and total work of art. Kirchner's residential studio in Berlin-Friedenau
After founding the artist group "Brücke" together with Karl-Schmidt-Rottluff, Erich Heckel and Fritz Bleyl and several successful years in Dresden, the artists, with the exception of Fritz Bleyl, went to the metropolis Berlin in 1911. At that time, the still young city had already developed into one of the most exciting cultural centers in Germany and thus also cast its spell over the young E. L. Kirchner and his "Brücke" colleagues. From then on he processed the impressions of his new place of residence in his studio on Durchlacher Strasse in Berlin-Wilmersdorf and later on Körnerstrasse in Berlin-Steglitz and Friedenau. During these years, the studio was his personal retreat, in which he managed more or less well to escape from the increasingly politically threatening outside world and from his psychologically battered inner life, until finally, in his longing for the greatest possible originality, he moved far away from the city to Davos in the secluded mountains of the Swiss Alps.

Kirchner furnished his studio with numerous exotic objects, e.g. with oriental carpets, Japanese screens, hand-carved wooden sculptures and individual pieces of African furniture. Most striking, however, are the textiles, some of which the "Brücke" artists had already designed in Dresden, such as the multi-part wall hanging painted with numerous nudes, with which E. L. Kirchner lined his attic apartment on Körnerstrasse in Berlin. Additionally, there were also matching tablecloths, embroidered cushions and sofa covers in the apartment, which are also depicted in the still life offered here.

The still life as a testament to Kirchner's enthusiasm for form and perspective
Around 1912 he created a small series of individual still lifes that are now in the Los Angeles County Museum of Art, the Aichi Prefectural Museum of Art in Nagoya, the Groningen Museum and the Von der Heydt Museum in Wuppertal. And even in later years, he occasionally returned to this traditional subject. While the idea of \u8203\u8203 transience often played a role in the so-called vanitas still lifes of past centuries, Kirchner was particularly concerned with forms, colors and perspective constructions. In stimulating, almost mysterious compositions, Kirchner combined the objects in his studio with the most interesting and varied forms: vases, floral arrangements, figures he had carved himself, a wide variety of vessels and books. He shows them on the tablecloths, which he often designed himself, some of which can now be precisely assigned through photographs. "Verblühte Tulpen (Faded Tulips) also shows a tablecloth the artist had decorated with female nudes, on which Kirchner arranges a vase with tulips, a small pointed oval bowl and individual books or sketchbooks reduced to their basic geometric shapes in strong, contrasting colors. In the top view of the tablecloth and the objects draped on it, and the flowers shown in a frontal perspective, Kirchner succeeds in creating a particularly fascinating composition that is detached from and suprerior to the traditional subject.

The double Kirchner. The discovery of a previously unknown painting
In the spring of 2015, the Kunsthalle Mannheim and the Kirchner Museum Davos dedicated the highly acclaimed exhibition "Der doppelte Kirchner. Die zwei Seiten der Leinwand" (The Double Kirchner. The Two Sides of the Canvas) to Ernst Ludwig Kirchner's canvases painted on both the front and the back. Today we know that Kirchner and his artist colleagues of the "Brücke" Erich Heckel, Karl Schmidt-Rottluff and Hermann Max Pechstein occasionally used the backs of canvases they had already painted on. In 1919, Kirchner wrote in a letter to an acquaintance: "I too have to save a bit now, and the material has become very expensive. But thank God the canvas has 2 sides." (Letter dated February 7, 1919). The renewed use of the canvas does not necessarily mean that the initial painting was rejected by the artist as inadequate, but that the number of new image carriers the artist actually required significantly exceeded the number of available canvases, due to Kirchner's great urge to create.

"Faded Tulips" shows an incomplete portrait of the writer Simon Guttmann (1891-1990) from 1912 on the back of the canvas, which is most likely based on a compositionally very similar pencil drawing from 1911, which today is in the collection of the Brücke Museum in Berlin. In the background, Kirchner again refers - as before with the tulip still life - to the furnishings of his studio on Körnerstrasse in Berlin. Here he hints at the embroidered wall hanging in the small attic niche. The portrait of Simon Guttmann, smiling quietly to himself, was apparently not known to the author of the detailed catalog raisonné of the oil paintings, Donald E. Gordon, when the catalog raisonné was created and was only officially registered in the Ernst Ludwig Kirchner Archive in Wichtrach/Bern this year.

Kirchner met the writer after moving to Berlin, when he made contacts in the literary circles of Berlin's avant-garde through his great interest in theater and vaudeville. Guttmann introduced the "Brücke" artists to the "Neopathetic Cabaret" in 1909, a circle of poets around Georg Heym (1887-1912), Jakob van Hoddis (1887-1942) and others. In 1910 he founded the literary magazine "Neue Weltbühne" and in 1912 he wrote the pantomime "The Merry Puck" for Heckel's partner Siddi Riha (1891-1982), which was performed in the "Neopathetic Cabaret". Further portraits of Guttmann can therefore also be found in the oeuvres of Erich Heckel, Karl Schmidt-Rottluff and even in Ludwig Meidner’s. Another painting by the writer by E. L. Kirchner, created in 1910, is part of the collection of the Nelson-Atkins Museum in Kansas City (Missouri).

An outstanding provenance. "To Prof. van de Velde the still life with bowl and flowers (tulips) for 500M, agree".
In 1916, "Faded Tulips" was for the first time exhibited in the renowned Kunstsalon Ludwig Schames in Frankfurt am Main and presented to the public in the Jenaer Kunstverein the following year. A few weeks later, Kirchner wrote to Walter Dexel, the then head of the Jenaer Kunstverein: "Dear doctor, thank you very much for your letter and your effort. So Prof. van den Velde the still life with bowl and flowers (tulips) for 500M, I Agree." (Letter 394 of April 2, 1917). This refers to the architect and collector Henry van de Velde (1863-1957), who shortly thereafter - like Kirchner before him - moved to Switzerland. Van de Velde showed great appreciation for Kirchner's art and his personality: he not only acquired the work offered here "Faded Tulips", but it was thanks to his financial and personal support that Kirchner spent ten months in the sanatorium Bellevue in Kreuzlingen in in September 1917, in order to improve his state of health. In a letter to Eberhard Grisebach in June, Kirchner wrote: "Van de Velde was here yesterday, he sent me the money for the tulips, he was very good and, after a stay on Staffel Alp, wanted to take me to the mental sanatorium in Binswanger." Once again he also mentions our tulip still life (Letter 423 of June 29, 1917). Kirchner also was a good acquaintance of van de Velde's eldest daughter Nele during these years and the years that followed, which to this day can be traced in letters from their correspondence. For example, Kirchner wrote to her in 1923: "Did dad get my picture for his birthday? [.] I thought it would be a good addition to the still life he already has.", and thus refers to the still life "Faded Tulips" in Henry van de Velde's collection again (quoted from: E. L. Kirchner, Briefe an Nele, Munich 1961, p. 51).

In the mid-20th century the painting entered the important collection of Mary and Leigh Block in Chicago. At that time, Leigh Block belonged, among others, the board of the Art Institute of Chicago and also was president of the renowned museum from 1970-1972. The couple had an impressive collection of paintings and works on paper and have been important patrons of the city's art institutions for decades. In addition to "Faded Tulips", her collection included paintings by Vincent van Gogh, Georges Braque, Juan Gris and Pablo Picasso. In the early 1980s, with the help of a generous donation, the Mary and Leigh Block Museum of Art was founded on the campus of Northwestern University in Evanston (Illinois), which today has its own collection with a focus on drawings, sculptures, prints and photographs from the 15th until the 21st century. [CH]
More Information
+
Sell
Get a free appraisal for a similar object!
+
Register for
Ernst Ludwig Kirchner
+
Buying from A-Z
+
Contact a specialist
+
Ernst Ludwig Kirchner Biography
Share