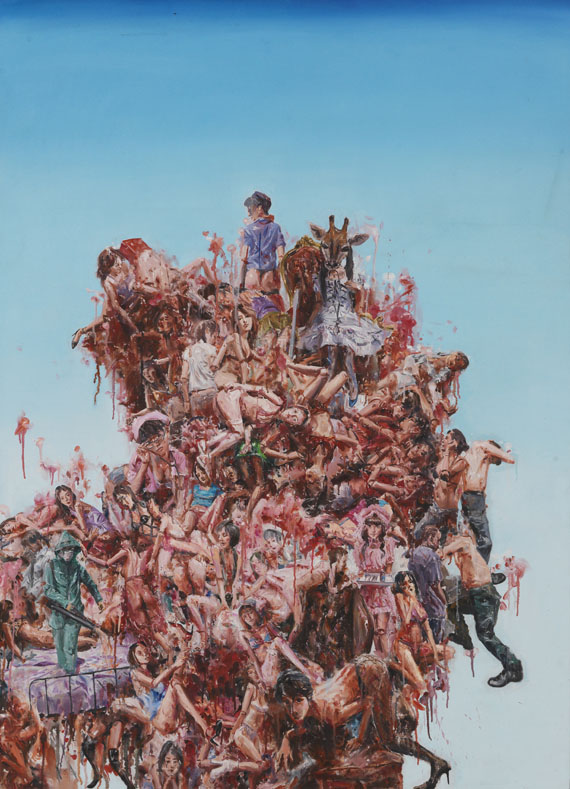 • Early neo-pop oriented work by the emerging Chinese artist.
• In his cityscapes under a blue sky, human bodies pile up into abstruse structures – for the artist they are an expression of the emotional world of his generation.
• Since 2019 he has been represented by the international gallery Lévy Gorvy, which has made his works known worldwide.
• This is the first time that one of his works is offered on the German auction market (source: artprice.com).

The Chinese artist Tu Hongtao was born in Chengdu in 1976 and completed his training in 1999 with a degree in oil painting from the China Academy of Art in Hangzhou. His early, neo-pop-oriented works are influenced by the major social and economic changes that the country was going through at the turn of the millennium. From 2001 onwards, urban landscapes, such as the work offered, here were created. In these pictures we see people stacked on top of one another, piling up into abstruse structures. New details keep popping up between the fleshy pink body parts, such as a bed with a figure in protective gear operating some sort of converted leaf blower, provocative nurses, or a figure in a white dress with a giraffe's head sitting on a throne. Tu Hongtao's crowds are confusing and should be understood as a commentary on the emotional world of his generation. Or as the international gallery Lévy Gorvy, which has represented the artist since 2019, describes it: "[..] sardonic cityscapes featuring piles of human bodies and dolls that reflect contemporary feelings of confusion, tension and desire" (quoted from: https: //www.levygorvy.com/artist/tu-hongtao/). In 2008, as with so many artists, there was an abrupt change in the work of the then young painter, towards an abstract, poetic visual language. In an interview with the music magazine "Rolling Stone", he comments on this change and explains that although his handling of images has changed, he still wants to think independently and express himself artistically. (Cf. Rolling Stone, Is he possibly the next “most valued Chinese Artist”?, 11/16/2020) [AR]
More Information
+
Sell
Get a free appraisal for a similar object!
+
Register for
Tu Hongtao
+
Buying from A-Z
+
Contact a specialist
Share