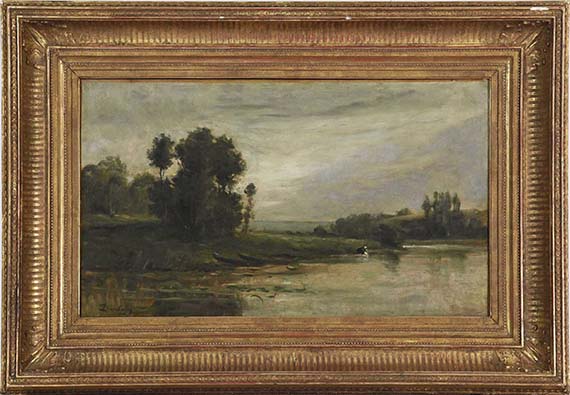 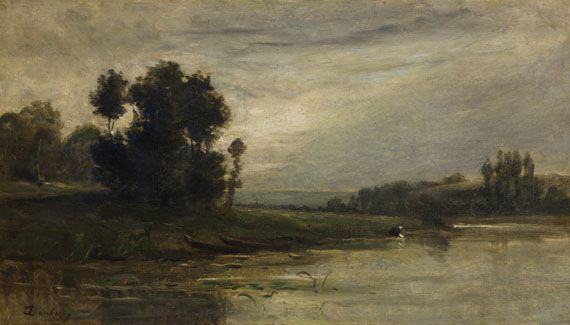 With an expertise from M. François Delestre, London/Paris, October 2022. The work will be included into the 2nd addenda vol. of the Catalogue raisonné.

Much of Charles-François Daubigny’s work unfolds in dialogue with the Oise, a picturesque river that originates in Belgium and eventually flows into the expansive Seine north of Paris. Based in Paris himself, Daubigny regularly exhibited at the Salon from 1838 onwards. He later joined the Barbizon artists’ community and painted his first Barbizon landscape in 1844. Daubigny greatly admired Camille Corot with whom he later formed a friendship. The so-called Barbizon School developed a new landscape perception in which Romantic and Realistic elements combine in a harmonious blend. Daubigny’s small paintings are magnificent examples of this approach. One of the first to place himself directly in front of the motif while working on his river landscapes, he created a fluid calmness and lyrical atmosphere in his paintings. Having organized a small studio boat, “Le Botin”, for this purpose, he traveled the Oise between Cergy, Pontoise, Valmondois and L’Isle Adam at different times of day and throughout the year. He also occupied a house with a studio in Auvers-sur-Oise. Daubigny adopted a very loose and free style of painting during his time on the Oise which began to suggest Impressionist elements through its attention to atmosphere, light and weather conditions. Starting in 1866 when he became a member of the rather conservative Salon jury, he declared his support for the paintings of the younger generation of Realist and Impressionist painters, until the repeated rejection of Claude Monet’s works prompted him to resign from this post. Daubigny nevertheless declined to take part in the first Impressionist exhibition in 1874 and continued to present his works at the official Salon. Paul Cézanne, Claude Monet, Auguste Renoir and Vincent van Gogh all expressed great appreciation for his art with its subtle poetic magic and touching intimacy. [KT]
More Information
+
Sell
Get a free appraisal for a similar object!
+
Register for
Charles-François Daubigny
+
Buying from A-Z
+
Contact a specialist
+
Charles-François Daubigny Biography
Share