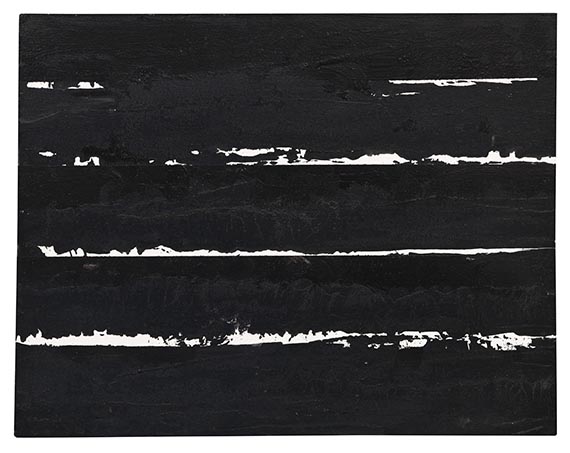 • In his works from after 1999, Soulages once again devoted himself to the high-contrast interplay of black and white.
• Comparable works from the early 2000s can be found in the Fondation Louis Vuitton and the Center Pompidou, Paris, in the Essl Collection, Klosterneuburg, and in the Musée Soulages, Rodez.
• The large-scale retrospective "Soulages" (2010) was the most visited exhibition by a living artist at the Center Pompidou, Paris, since Dalí's 1979 retrospective.
• On the occasion of his 100th birthday in 2019, the Louvre in Paris is dedicated a major exhibition to Soulages in the Salon Carré, an honor reserved for only a few artists..


"My painting, look at it, is not black at all. Black is a color of light. It creates contrasts through absorption and reflexion."
Pierre Soulages in a talk with Christoph Paul Klapproth, in: Cicero Online, December 17, 2008, www.cicero.de/kultur/schwarz-ist-die-farbe-des-lichtes/41169

Beyond black
Pierre Soulages began to dedicate his art to the color black as early as in the 1970s. At first his works still showed clearly gestural-informal traits, before he made his first monochrome black painting in 1979. Soulages refers to this as "outrenoir" [over black], a term now used to refer to the paintings of the following years, and, more generally, to the deep black that characterizes his work. "Outrenoir" describes a black that goes beyond the ordinary black, which emits a light reflected and transformed by the black, evoking feelings in both the artist and the viewer: "I found that the light reflected by the black surface elicits certain emotions in me. These aren't monochromes. The fact that light can come from a color which is supposedly the absence of light is already quite moving, and it is interesting to see how this happens." (Pierre Soulages in a conversation with Z. Stillpass, in: Interview Magazine, May 2014). For the painter, the color black is therefore never simply black. Soulage's application of paint creates varying surface structures, sometimes relief-like, with deep indentations, sometimes smooth, supple and shiny, sometimes structured, lively and full of tension. The respective surface absorbs the light or reflects it and thus gives the deep black, pure surface iridescent, multi-faceted nuances. In the work offered here the black surface is interrupted by at times shorter, at times longer, narrow white gaps. Our view is guided across the picture‘s surface by the horizontal stripes from left to right, but, owing to the lively structures of the paint application that visualize the painter's movements in the process of creation, it cannot linger on any specific area of the picture.

Painting with light
"I do not tell stories. I do not depict things. I paint and I present", explains Pierre Soulages (quoted from: www.lesoeuvres.pinaultcollection.com/en/artist/pierre-soulages). His painting avoids any reproduction or imitation of what has been seen, does not arouse any associations with the real world and does not create pictorial spaces that have sprung from the artist's imagination. Instead, Pierre Soulages paints with light, with reflections, transparency, pastosity and texture, alternates between opacity and shine, creates contrasts and tonalities within the deepest black, and thus does not represent the real world, but the painting itself. This is also why why the pictures‘ titles are consistently structured according to a strict principle. They only contain a reference to the pictorial genre "Peinture", the dimensions and the date, so that viewers, apart from their visual impressions, are not influenced by the abstract color areas and the light-reflecting, sensually shiny surface. Undisturbed, an experience of a completely different kind of 'spatial painting' emerges: Soulages plays with the relationship between work, viewer, light and space. While in classic, perspective painting the pictorial space shown lies, so to speak, behind the canvas, directing our gaze into the depths of the picture, in Soulage's painting the pictorial space lies in front of the canvas: the light that strikes the pictorial surface is reflected and cast back at the viewer, basically creating an invisible connection between the two parties, and thus involving the viewer in the painting.

Black and white. The paintings after 1999
In his work from 1999, Soulages devoted himself to the high-contrast combination of black and white for the first time after many years of intensively dealing with purely black painting - only occasionally interrupted by excursions into reddish-brown or blue color worlds. "Black initially interested me in terms of its relationship to other colors, it forms a contrast. Next to it, even a dark color comes alive. White can also become more intense." (Pierre Soulages, in: Ex. cat. Martin-Gropius-Bau, Berlin 2010/2011).
In the work offered here, too, narrow stripes of the primed canvas remain visible between the horizontal black stripes that were imperfectly applied with a broad brush. Black and white meet and the light strikes deep dark and extremely light color fields, it is transmitted from one to the other, reflected and stopped by the raised areas of the colored areas. The indistinctly separated surfaces create a lively, sensually attractive spatial presence in connection with their special materiality and the color surface, which subtly shines or appears in a chatoyant matt black, depending on the incidence of light and the position of the viewer.

"Outrenoir" on all continents
Since 1960, the most prestigious museums and institutions have dedicated extensive solo exhibitions to him, including the Musée du Louvre, the Center Pompidou and the Musée National d'Art Moderne in Paris, the Carnegie Museum of Art in Pittsburgh, the National Museum of Contemporary Art in Séoul, the Hermitage in Saint Petersburg, the Museum of Modern Art Ludwig Foundation in Vienna, the Kunstmuseum Bern, the Museum Ordrupgaard in Charlottenlund, the Martin-Gropius-Bau in Berlin and the Museum Folkwang in Essen. His works are in museums in over thirty countries on six continents. Soulages is now considered France's most important living artist and one of the most innovative, progressive painters of the 20th century. [CH]
More Information
+
Sell
Get a free appraisal for a similar object!
+
Register for
Pierre Soulages
+
Buying from A-Z
+
Contact a specialist
+
Pierre Soulages Biography
Share