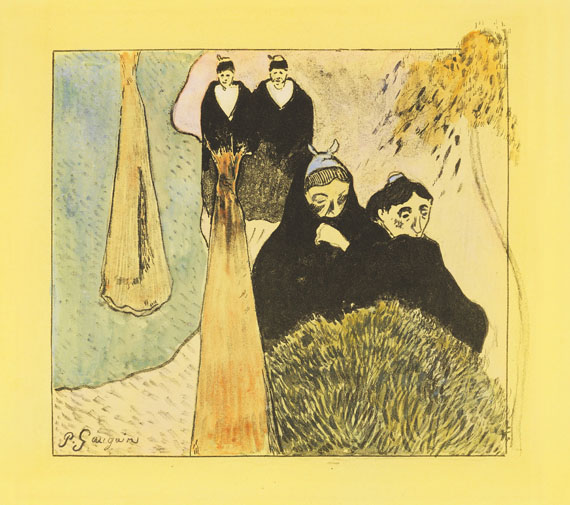 enlarge image
+
22
Paul Gauguin
Les vieilles filles à Arles, 1889.
Zinkdruck, watercolor, gouache, hand-colored
Estimate:
€ 60,000 / $ 55,200
Sold:
€ 75,000 / $ 69,000
(incl. surcharge)
Les vieilles filles à Arles. 1889.
Zinkdruck, watercolor, gouache, hand-colored.
Mongan/Kornfeld/Joachim 9 Aa (of B). Signed in plate's lower left. Only hand-colored first proof. On yellow wove paper. 32 x 32.5 cm (12.5 x 12.7 in). Sheet: 32 x 33 cm (12,5 x 12,9 in).
Motif 8 from the series: "Suite Volpini, 10 Zincographies", first edition released by the artist in May 1889. Printed by Edouard Ancourt, Paris.[KT].
• This is the only hand-colord first print of the motif on the rare yellow paper in first edition.
• Sheet from the "Suite Volpini", Gauguin's first artistic manifesto in graphic form, which he presented in the seminal exhibition at Café Volpini in Paris in 1889.
• Both Gauguin and van Gogh depicted the 'Arlésienne', while the one is at the Musée d'Orsay, Paris – the counterpart 'Arlésiennes-Mistral' is at the Art Institute, Chicago.
• Formerly part of the collection of Anson C. Goodyear, founding member and first president of the Museum of Modern Art, New York.

The presumably last print from the 'Suite Volpini' is titled "Les Vieilles Filles à Arles" (The Old Maidens of Arles). Owing to the subsequent coloring, Gauguin turned this motif, which he first drew on the zinc plate in black and then had it printed, into something unique: with the careful use of delicate watercolor tones, partly mixed with gouache, he created an enchanting scene of a very personal memory of an apparitional encounter. The motif essentially corresponds to a direct translation of the painting "Arlésiennes (Mistral)" (Women from Arles (Mistral) from 1888, today in the collection of the Art Institute of Chicago. (Fig.) The figure in the foreground shows a resemblance to Madame Ginoux in the painting "Le Café de nuit à Arles" (We show here a portrait created at the same time in the execution of Vincent van Gogh (fig.)) Walking through a public garden in Arles, women hold their scarves in front of their faces to protect themselves from the Mistral, the cold Provençal wind, to which Gauguin refers in the title of the painting. The trees are also wrapped and stand in strange conical shapes at the edge of the path. A bush, rendered with delicate strokes, blocks the path and impedes the procession of the figures, we observe a moment of standstill. In the right edge of the picture, Gauguin lets an unruly young tree escape the picture’s border. Gauguin took over the essence of the powerful and enigmatic painting "Arlésiennes (Mistral)", a scene Gauguin saw in the public garden directly opposite Van Gogh's "Yellow House" into the present zincography. With large, flat areas of color, with an arbitrary use of space and the enigmatic silhouettes, Gauguin illustrates his search for pictorial harmony and symbolic content. Here four women wrapped in shawls stroll through the garden. The two closest to the viewer avert their gaze and curiously cover their mouths. Their somber outlines echo the two orange cones, which probably represent shrubs that were wrapped to protect them from the frost. The bench in top left of the path rises steeply and defies the logic of perspective. Equally enigmatic is the mysterious bush on the left, into which Gauguin deliberately embedded forms suggesting eyes and a nose, giving the impression of a strange, watchful presence. With an aura of suppressed emotions and elusive meaning, "Arlésiennes (Mistral)" explores the ambiguities, mysteries and emotions on which Gauguin based the apparitions. [MvL]

Further works from this private collection will be offered in our Modern Art Day Sale (Saturday, December 10, 2022, lot 455, 489, 527).
More Information
+
Sell
Get a free appraisal for a similar object!
+
Register for
Paul Gauguin
+
Buying from A-Z
+
Contact a specialist
+
Paul Gauguin Biography
Share