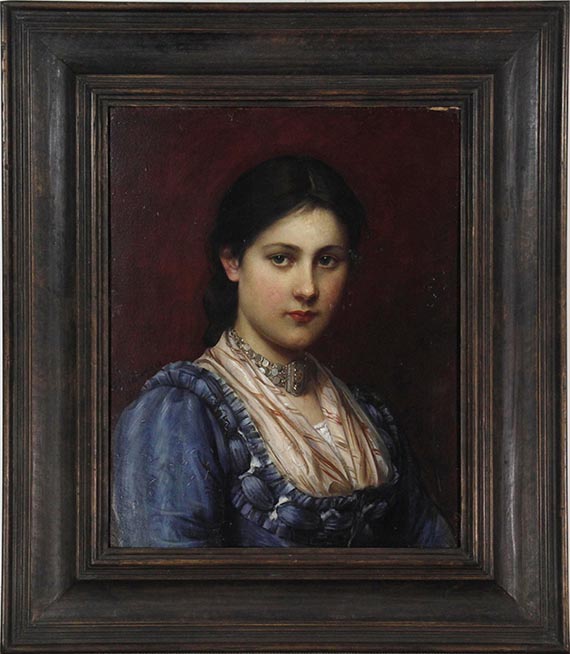 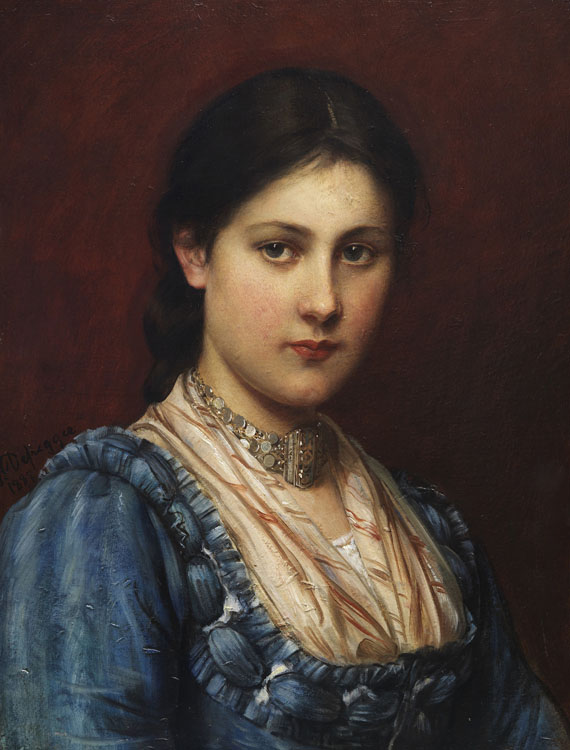 Defregger owes his fame and his great success with upper-class buyers in the last third of the 19th century to his portraits of girls. The most common of these are the so-called ‘Dirndls’, portraits of Tyrolean country girls in their characteristic costumes, embodying a healthy, rural beauty untouched by the effects of city life. In contrast to the impressionist glamourous lady of the early fin-de-siècle, which the Parisian impressionists depicted in high numbers, Defregger, himself a Tyrolean farmer's son, drew a different female ideal. Defregger grew up on his parents' farm in Stronach in the Puster Valley. In the 1860s, his career as a painter began in Innsbruck and led him via the Munich Academy to Paris and finally to Karl von Piloty's history class, where he completed his studies from 1867 to 1870. A number of the Dirndl portraits go back to his stays in Bozen from 1872, where he finally had a villa with studio built. From the beginning of the 1880s, his representative villa in Munich on Königstraße became a cultural center and underlined his status as an emerging artist in the Munich art scene, which he held alongside Lenbach and Stuck, who are celebrated as the 'painter princes' today. Some of his models also seem to change. Here he shows an elegant bourgeois daughter in an elegant blue silk dress with a cashmere scarf and a silver choker in front of a red-brown background. The serious, slightly melancholic gaze is typical of Defregger's very own gallery of beauties. A demure, respectable, harmless beauty in a traditional robe elevated to the ideal type, following the tradition of a ‘gallery of beauties’. [KT]
More Information
+
Sell
Get a free appraisal for a similar object!
+
Register for
Franz von Defregger
+
Buying from A-Z
+
Contact a specialist
+
Franz von Defregger Biography
Share