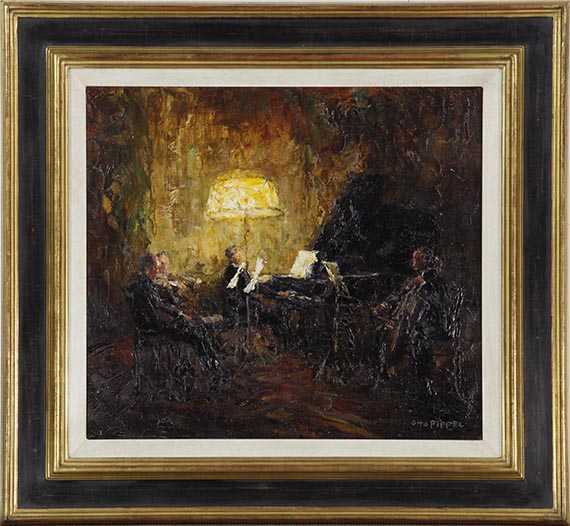 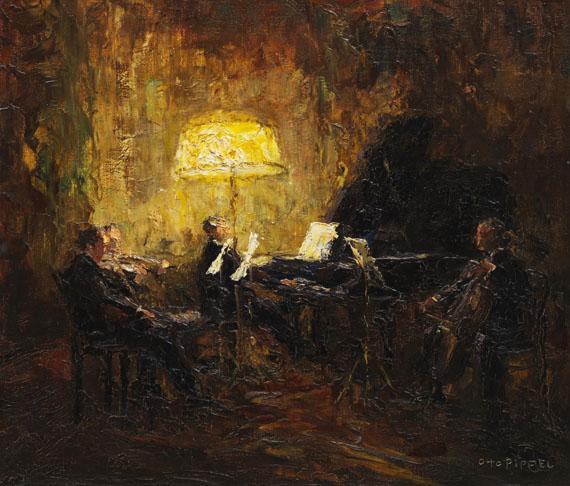 Otto Pippel is recognized as one of the most prominent second-generation Impressionists in the region of southern Germany. After commencing his painting studies in Karlsruhe in 1905, he transferred to the Dresden Academy in 1907 to study with Gotthard Kuehl, who was noted for his portrayals of interior scenes. Traveling to Paris in 1908 to complete his studies, Pippel was inspired by the French Impressionists as he continued to develop his skills in the art of light and Impressionist painting. He went on to join the “Luitpold Group” and had his first exhibition at Munich’s Glaspalast in 1912. Along with numerous landscapes, Otto Pippel also frequently portrayed Munich’s bourgeois society, of which he was himself a member. Scenes of glamorous social entertainment events, including dinner parties in opulent settings, concerts and soirées, became part of his repertoire of motifs during the belle époque and remained a permanent focus of his work. In contrast to Impressionist outdoor painting, which he also adopted following his visit to Paris in 1908, he mainly concentrated on interior scenes, defining his own new genre within the field of Impressionist painting. Illuminative effects emanating from a warm, central light source whose glow fills the semi-darkness of the room are complemented and enhanced by the color of the elegant black of the gentlemen’s suits, with the white effects of the sheet music rounding off the harmonious color scheme. Pippel thus echoed the mid-19th-century concept of ambient, musical imagery rendered in color harmonies, wherein subject matter, visual narrative and detail play a secondary role to pure color impression. [KT]
More Information
+
Sell
Get a free appraisal for a similar object!
+
Register for
Otto Pippel
+
Buying from A-Z
+
Contact a specialist
+
Otto Pippel Biography
Share