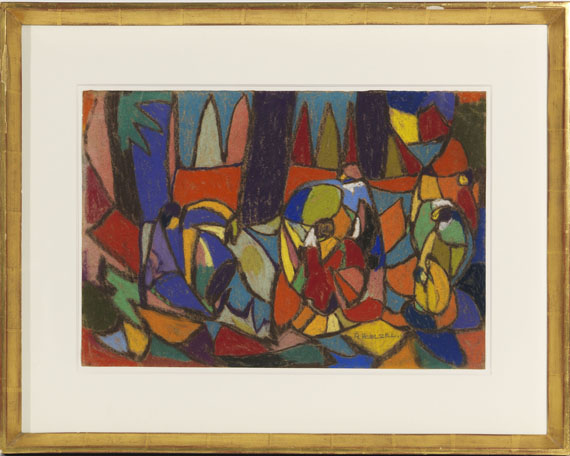 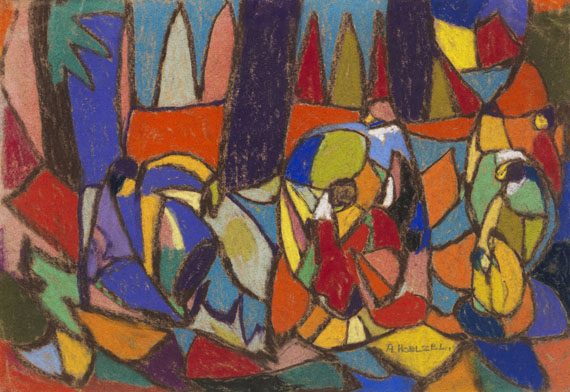 • Particularly large work characterized by a painting-like effect and a special radiance.
• Other pastels from this time are at, among others, the Städel Museum, Frankfurt am Main, the Museum Moderner Kunst Stiftung Ludwig, Vienna, and the Sprengel Museum, Hanover.
• In later years, the generation of artists around the Bauhaus luminaries Johannes Itten (1888-1967) and Oskar Schlemmer (1888-1943) examined Hölzel's theories.

This work's authenticity was kindly confirmed orally by Dr. Alexander Klee, Vienna. We are grateful for his kind expert advice.

Starting with the occupation with glass windows and following his intensive color studies, Adolf Hölzel attained a form of abstraction that allowed him to integrate his compositional ideas into a color canon of two-dimensional color fields. This form of abstraction, which also uses figural motifs, is closely linked to the name of Hölzel and his students. In addition to the overall effect, he was also concerned with a meditative character inherent in all his works, whether they are representational, abstract or freely composed. The adherence to a basic religious motif, which is just slightly hinted at in our work, is particularly characteristic of Adolf Hölzel's late pastel works. Even though they serve as a kind of leitmotif, they do not assume a dominant role. Hölzel clearly separated the color fields from one another, creating complementary- as well as light and dark contrasts, bringing everything back together as a harmonious whole. The following words of the artist speak for themselves: "Make one into two and two into one / And two into three and three into two / and everything together again into one / This is how the picture will become great. / Unfolding unprecedented wealth despite simplicity." (Adolf Hölzel, quoted from: Edith Neumann, Und immer wieder rot, blau, gelb, in: ex. cat. Adolf Hölzel. Wegbereiter der Abstraktion, Galerie Albstadt, 1999/2000, p. 57). [CH]
More Information
+
Sell
Get a free appraisal for a similar object!
+
Register for
Adolf Hölzel
+
Buying from A-Z
+
Contact a specialist
+
Adolf Hölzel Biography
Share