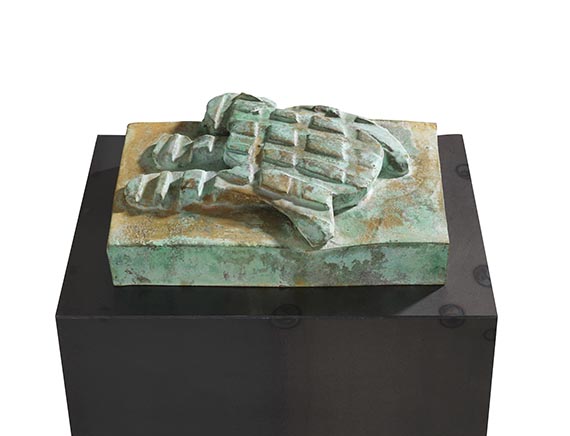 enlarge image
+
144
Thomas Schütte
Frau VI, 2016.
Bronze, corroded
Post auction sale: € 40,000 / $ 36,800
Frau VI. 2016.
Bronze, corroded.
Monogrammed and numbered on the side of the plinth, as well as with the number "211298". From an edition of 20 copies. 8 x 35 x 23 cm (3.1 x 13.7 x 9 in).
[SM].
• In 2013/2014, the Fondation Beyeler honored Thomas Schütte's figurative creation in a comprehensive solo show.
• Schütte's work demonstrates a radical love of experimentation that makes him one of the most fascinating and innovative artists of the present day.
• Since the early 1990s, Schütte has been occupied with the female figure and shifts the limits of the representation of the human form.
• Schütte explores the possibilities of the sculptural design of the human figure and thus attained an innovative style.

Thomas Schütte is perhaps one of the most versatile contemporary German artists. In his multifaceted oeuvre, which now spans four decades, we find paintings, watercolors, drawings, photographs, prints, sculptures, installations and architectural models, so that a concrete classification of his work seems impossible. Thomas Schütte dares to use classic techniques, genres and themes, in which everything seems to have been told long ago. This also applies to the plastically modeled female figure, which he implements in durable materials such as bronze, aluminum and steel. "The female sculptures that emerged from small ceramic figures at the end of the 1990s show the range of his experimental practice: The first reclining female nudes can still be assigned to the environment of the classicist figures of the early 20th century and are reminiscent of the heavyweight nudes of Maillol, followed by the monumental women with sawed-off limbs, distortions, flattened bodies, provocative poses – ruthlessly exposed on steel work tables – far from any stylistic art historical classification. His rough treatment of the motif, however, does not stem from an intention to break a taboo of devaluating the modernist world of forms, but to examine artistic means of expression in order to use them in the present." (Quoted from: Andrea Bellini and Dieter Schwarz, Thomas Schütte - Frauen, 2013) Thomas Schütte studied in the class of Fritz Schwegler and later with Gerhard Richter at the Düsseldorf Art Academy from 1973 to 1981. Today he is one of the most important representatives of German contemporary art. The Fondation Beyeler calls him "one of the most fascinating and innovative artists of our time". His work has been shown with impressive continuity in important solo exhibitions in the most renowned international museums: in 2004 at the Stedelijk Museum in Amsterdam, in 2006 at the Staatliche Kunsthalle in Baden-Baden, in 2009 at the Haus der Kunst in Munich, in 2010 at the Museo Reina Sofía in Madrid, in 2012 at Serpentine Gallery in London and in 2013 at Fondation Beyeler in Basel. In 2016, the Moderna Museet in Stockholm honored him with a first grand retrospective. Schütte participated in the documenta 8, IX and X in 1987, 1992 and 1997. In 2005 he was awarded the Golden Lion at the Venice Biennale for his female sculptures. For 2023, the Museum of Modern Art in New York plans a major retrospective of the artist's work.
More Information
+
Sell
Get a free appraisal for a similar object!
+
Register for
Thomas Schütte
+
Bidding Options
+
Written bid
+
Buying from A-Z
+
Contact a specialist
Share