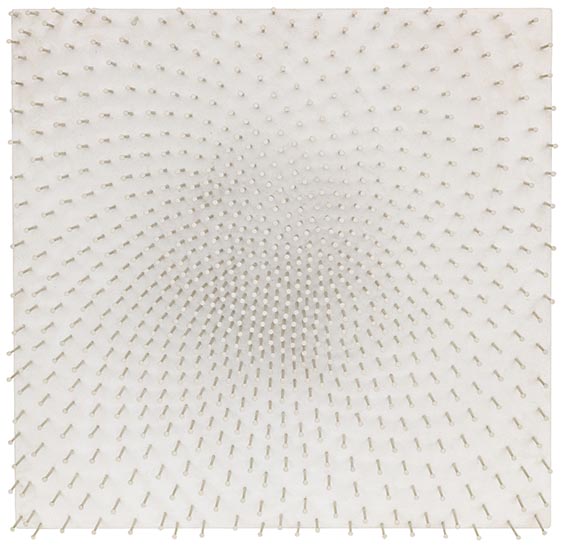 This work is registered in the Uecker Archiv with the Number GU.66.018 and is noted for inclusion in the forthcoming catalogue raisonné.

The Düsseldorf artist group ZERO, founded by Heinz Mack and Otto Piene in 1958 and joined by Uecker in 1961, was intentionally terminated at the height of its public recognition in November 1966. In retrospect, Mack described this end, which immediately followed the last joint exhibition "ZERO in Bonn. Mack, Piene, Uecker", with the following enthusiastic words: "In 1966, Zero found a positive end. More than a thousand people celebrated it in only one night. I myself had wished for this ending: an ending that I found just as liberating as the beginning of Zero." (Heinz Mack, quoted from: Ulrike Schmitt: Zero ist gut für Dich. In: Sediment Mitteilungen zur Geschichte des Kunsthandels, issue 10. 2006, no. page) ZERO had achieved its goal, ZERO had given post-war art a revolutionary new beginning, had freed art from the shackles of tradition. Had overcome the object as well as the gestural brushstroke as the artistic script. ZERO was a spectacular artistic new beginning that left all art historical conventions behind and pursued a purified and puristic expression, of which the present work is a very special example. The revolutionary creations of these years conquer space, they leave two-dimensional grounds and attain an aesthetic clarity that incorporates the play of light and shadow into the composition. Our "Kreis, Kreise" is a particularly beautiful, almost iconic testimony to ZERO art for its extreme reduction and the long, narrow nails that cast the gentle play of their shadows across the surface. "Zero is stillness. Zero is the beginning. Zero is round. Zero rotates. [..] Zero is white." says the 1965 ZERO manifesto written by Piene, Mack and Uecker. It is hard to find better words to describe the soft and purified aesthetic impression that "Kreis, Kreise" offers its observer. Additionally, this is one of the first works addressing the "Kreis, Kreise" (Circle, circles) theme, which would be formative for Uecker over the following decades, and finds expression in, among other things, his prints, in which the wave-like momentum of motion unfolds from the center. Uecker also found inspiration for this phenomenon in nature, for example in gently fleeting wave formations caused by a rock on the surface of water. Uecker's art, free from color, gesture and flow, fascinates and captivates, it is reduced and quiet - especially works from his early creative period - at the same time it has an indescribable aesthetic presence. Above all, his creations from the ZERO period are surrounded by an aura that cannot be reproduced and can only be experienced in front of the original work. [JS]
More Information
+
Sell
Get a free appraisal for a similar object!
+
Register for
Günther Uecker
+
Buying from A-Z
+
Contact a specialist
+
Günther Uecker Biography
Share