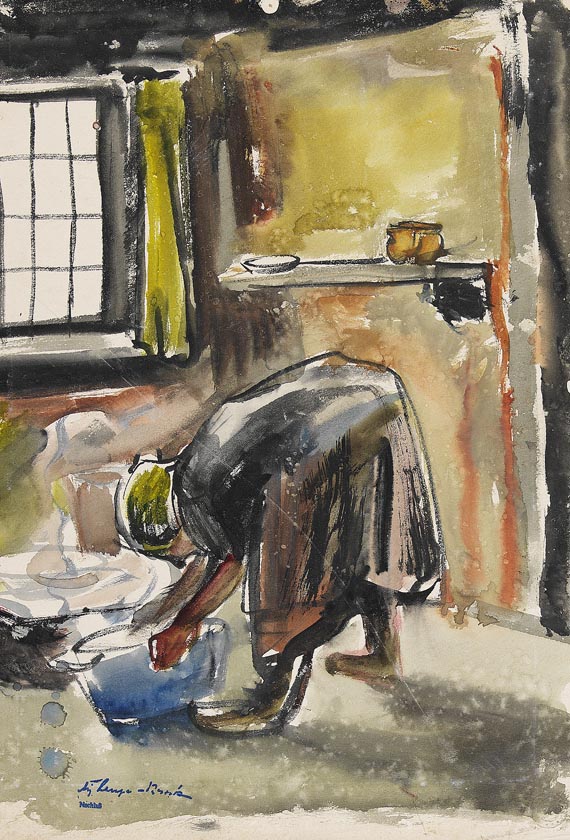 Interieur mit Waschfrau. Anfang 1920er Jahre.
Watercolour and India ink brush.
With the estate stamp lower left. On light cardboard by Schoellers-Hammer (with blindstamp). 45,5 : 31,7 cm (17,9 : 12,4 in), the full sheet. After serving a painter’s apprenticeship, August Lange-Brock attended the Hamburg School for the Applied arts. During the first world war he was dispatched to the Balkans as a draughtsman. After the war, Lange-Brock was admitted to Arthur Illies’ master class. For a while in 1921, Lange-Brock was at the Bauhaus in Weimar, where he forged ties with Klee, Gropius, Kandinsky and especially Moholy-Nagy. In the mid-1920s, Lange-Brock worked as a scene painter for Max Reinhardt at the Deutsches Theater in Berlin and also for Herwarth Walden’s magazine Der Sturm. After training as a commercial art teacher, Lange-Brock was employed at the Hamburg Vocational School for painters. His medium of choice was watercolour and in it he painted theatre scenery and commercial graphics as well as studies from nature and landscapes, views of Hamburg, still lifes and graphically expressive portraits. [NB]