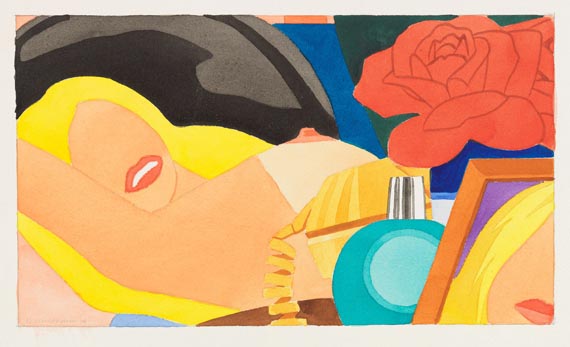 Tom Wesselmann was born in Cincinnati / Ohio on 23 February 1931. He begins to study psychology at the University of Cincinnati in 1951. One year later he was called up for military service in the Korea War, during this time he began to draw cartoons. In 1954 he resumed his studies and, apart from this, he attended courses at the art academy. He moved to New York and attends classes with Nicolas Marsicano at the Cooper Union School for Arts and Architecture in 1956. Beginning with a series of collages in small format, Wesselmann made his first nude depictions. His first one-man-show took place at the Tanager Gallery in New York in 1961. His choice of trivial motifs, their monumentalization, reduction to stereotypes, the sexual emblematic and the usage of lucent colors made him one of the founding fathers of American Pop Art in the 1960s, he clearly distanced himself from the Abstract Expressionism of the New York School. The same year he began working on the “Great American Nudes“, which can be regarded as an act of provocation in the context of the moral standards of those days. In 1963 Wesselmann married Claire Selley, who was his most important model.

Along with general objects of utility, the female body is the predominant motif of Wesselmann’s works. In a pornographic pose, with extreme necklines or, as it is the case in this watercolor, rather decent, combined with objects such as a flacon, photo frame and flower. The lucent colors suggest a striking representation of reality, at the same time this effect is ably questioned.

In 1980 he published a treatise about his artistic development under the pseudonym Slim Stealingworth. In 1983 first 'Metal Works' were produced, which were based on the artist's drawings and sketches and which are from now on in the center of the artist's interest. In 1994 a comprehensive retrospective took place at the Kunsthalle in Tübingen. Wesselmann died in New York on 17 December 2004. [EH].