11
Isaac Newton
Quadratura Curvarum (1762)
Estimate:
€ 3,000 / $ 3,510
Sold:
€ 3,000 / $ 3.510
(incl. 20% surcharge)
Lot description
Newton, I., Tractatus de quadratura curvarum. In usum studiosae juventutis mathematicae explicationibus illustratus a D. Melander. With 1 folding copper plate . Uppsala 1762. Contemp. half calf. 4to. 112 pp.Wallis 297. - Gray 297. - DSB X, 50f. - Not in the Babson Coll. - Rare Swedish edition of the famous tractate by Newton, which was first released as one of the two mathematical appendices to his Opticks in 1704. Released and with a preface by the famous astronomer Daniel Melander(hjelm) (1726-1810), professor of astronomy in Uppsala and secretary at the Stockholm Academy of Sciences. The publication comprises the tractate by Isaac Newton, followed by the comprehensive commentary by Melanderhjelm. The copper plate of this edition was made by the famous globe maker Anders Akerman , who had settled in Uppsala as an engraver and who was supported by the Stockholm Academy (cf. Tooley I, 15 as well as Muris/Saarmann pp. 211ff.). - Just slightly stained in places, 1 l. with small restored marginal split. All in all fine copy, with autogr. ownership entry of Magnus Alopaeus.
More Information
+
Sell
Would you like to sell a similar object?
+
Register for
Isaac Newton
+
Buying from A-Z
+
Contact a specialist
+
Isaac Newton Biography
Share 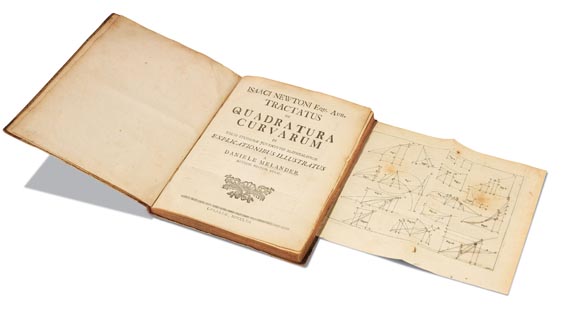