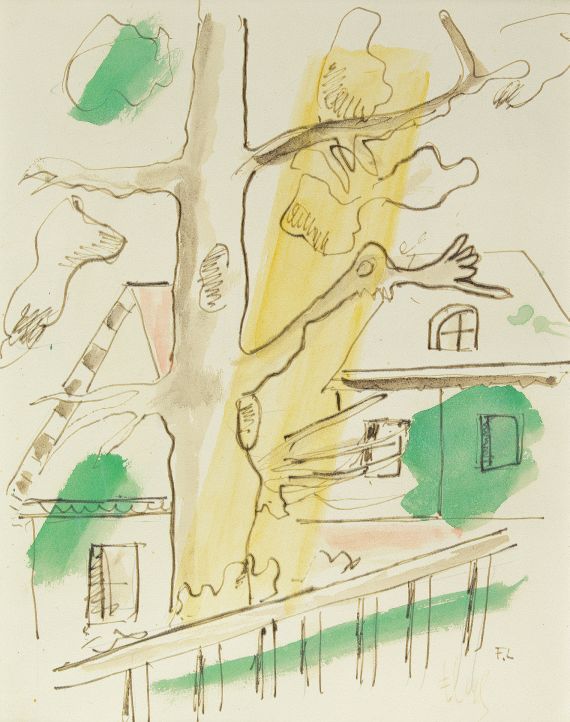 With a photo-expertise by Irène Hansma, Paris, from 4 May 2009. The work will be included in the catalogue raisonné of paper works which is still in progress.

The French painter Fernand Léger was born at Argentan (Normandy) on 4 February 1881. From 1897-1899 Fernand Léger served an apprenticeship in architecture in Caen, where he worked as an architectural draughtsman. In 1900 Fernand Léger went to Paris, attending both the École des Arts Décoratifs and the Académie Julian in 1903-04. In Paris Fernand Léger soon came into contact with the Paris avant-garde, making friends with Robert Delaunay, Henri Matisse, Henri Rousseau and Guillaume Apollinaire. The work of Paul Cézanne, which he first saw at the large Cézanne retrospective at the 1907 Salon d'Automne, made an enormous impression on him. Cubist painting, the work of Pablo Picasso and Georges Bracques, shaped Fernand Léger's conception of form and from 1909 he developed a distinctively unconventional reduced Cubist style, its formal astringency linked in 1913-14 with a sharply contrasting palette of pure colors.
After the First World War Fernand Léger - fascinated by the power and beauty of modern technology - arrived at a language of forms that was even more geometric: cylindrical configurations reminiscent of the welter of pipes and machinery in an engine room. Man and machine were thus conflated in the period of Fernand Léger's work known as his "période mécanique". By 1920 Fernand Léger had attained a sort of mechanised classicism: precise, geometrically defined, hard-edged monumental representation of such objects as cogwheels, screws and pipes, in which the human figures are included as machine-like beings.
From the 1930s, however, Fernand Léger's style was again looser and curvilinear. Overtones of Surrealism also emerged in his work.
"You have to separate the drawing from its colors. This is no illusion, as I have seen it. When I was in New York in 1942, I was impressed by the bright lights of Broadway which sort of painted the streets. You just stand on the street, talking to someone, and suddenly the street turns blue. The color fades, turning into yet another, like yellow. The color of the spotlight is free: it in space." (Städtische Kunsthalle Düsseldorf, Fernand Léger, Düsseldorf 1970). This appealing work is based on this concept. The object's outlines have been made in India ink, however, they do not restrict the colors which have been used freely by the artist.
Fernand Léger spent the war years 1940-1945 in the US, where he taught at Yale University. After the war Léger returned to France, where he died at Gif-sur-Yvette near Paris on 17 August 1955. [KD].