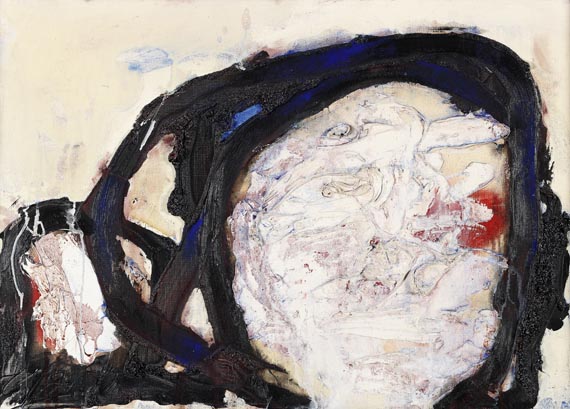 Abulein I. 1974.
Oil on canvas.
Signed and dated "74" lower left. 50 : 70 cm (19,6 : 27,5 in). In 1971 Schumacher again concentrated more on oil painting. He now put his arc forms on canvas with great aplomb and freedom. “Line evolves from the rhythmic movement of the whole body, rather than from the wrist alone. [...] It is interrupted where it encounters resistance and continues until it receives a sudden jolt or something felicitous occurs.” (quoted in: Werner Schmalenbach, Emil Schumacher, Dortmund 1992, p. 61). The pastose relief created by the masses of pigment in Abulein is reminiscent of Schumacher’s first tactile objects, with which he started exploring the properties of his materials as matter back in the 1960s. The concepts of “matter” and “space” would thenceforward quicken and enrich what had until then been flat surface painting. [ME]
EXPERTISE: We are grateful to Dr. Ulrich Schumacher, Emil Schumacher Stiftung Hagen, for his help in cataloguing this lot. The work is recorded at the archive under the no. 0/4475 and will be included in the forthcoming catalogue raisonné
PROVENIENZ: Galerie Heimeshoff - Jochen Krüper, Essen.
Private collection Switzerland (acquired in 1974).