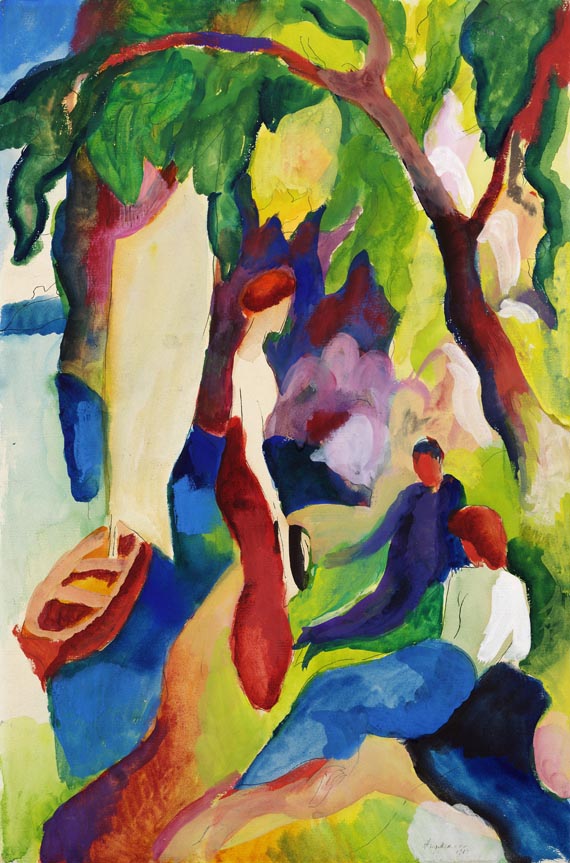 Frauen am See (Die Landung). 1913.
Watercolour, gouache and pen and India ink.
Heiderich Aquarelle 377. Vriesen Aquarelle 382. Signed and dated lower right. On laid paper, firmly mounted on cardboard. 45 : 30 cm (17,7 : 11,8 in), the full sheet. Being filled with enthusiasm about the art of Böcklin, August Macke began his studies at the art college and the arts and crafts school in Düsseldorf at the age of 17. In 1907 he travelled to Paris, where he saw the paintings of the Impressionists, which fascinated and influenced him. Later he attended Lovis Corinth’s painting school for a short time. In 1909 he got acquainted with Franz Marc in Tegernsee, with whom he would be friends for the rest of his life. With their colourful and spacious two-dimensional forms Macke's works from that time clearly displayed the influence of the painting of Henri Matisse and Franz Marc. In 1911 August Macke joined 'Der Blaue Reiter', a group of artists from Munich. On another trip to Paris with Marc he got to know Robert Delaunay and his orphic way of painting.

This form of Cubism notable for a vibrant colourism exerted a lasting influence on Macke and also informs our intense watercolour, which he painted while staying with his wife in Hilterfingen, Switzerland. Together with the artists Hélène and Louis Moilliet, the Mackes sailed on Lake Thun – carefree holidays in a late summer that seemed like paradise living on in memory. As is so often the case with Macke, this work is suffused with personal experience. Our watercolour is like a snapshot of that idyllic, light-flooded scenery as viewed from the artist’s vantage-point, which was slightly above that of the friends accompanying him. However, Macke actually painted this particular watercolour in his studio, using historic models and sketches he had made on site for the composition. The palette is indebted to the colour theories of Orphic Cubism. Our picture radiates spontaneity and freshness as well as the tranquillity of a classic landscape. This fascinating combination of opposites is what makes it irresistible.

The trip to Tunis with Paul Klee and Louis René Moilliet in 1914 also contributed to the development of his own style of bright, intensive coloration and crystalline design. On 26 September 1914 Macke fell at the western front in France at the age of 27. [KR]
EXPERTISE: We are grateful to Ms. Ursula Heiderich, Syke, for her expert advice
PROVENIENZ: Verein zur Förderung Deutscher Kunst (1918 to 1924).
Private collection Dr. Hessberg, Essen (since 1924).
Private collection Dr. Kirchner, Gelsenkirchen.
Private collection South Germany.
AUSSTELLUNG: Das junge Rheinland, Kölnischer Kunstverein, Cologne, January-February 1918.
Macke. Aquarell-Ausstellung, Städtisches Kunsthaus Bielefeld, 1957, cat.no. 382, p. 48 (with illustration).
The work is recorded in the estate lists under the number "A 116". After the large format pen and India ink drawing "Rast nach dem Segeln" (Heiderich Zeichnungen 2077), which basically devised the motif and the composition. The drawing and the watercolour provided the basis for the no longer existing painting "Picknick am Segelboot (Die Landung)" (Vriesen Gemälde 445) from 1913
In good condition, colours still fresh. Upper left corner with two tiny pin holes. Right edge with small paper loss. With a few negligible traces of rubbing.