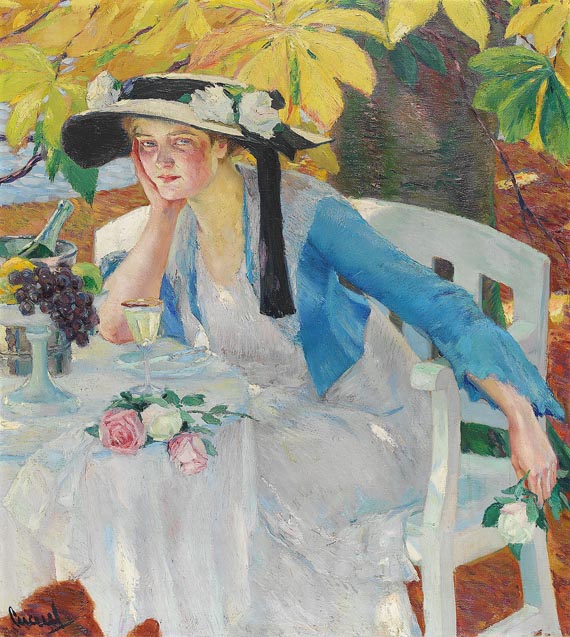 Herbstzauber. Um 1912.
Oil on canvas.
Signed lower left. Once more signed on the reverse as well as signed and titled on the stretcher. 100 : 90 cm (39,3 : 35,4 in). Edward Cucuel was born the son of a newspaper publisher in San Francisco. Already at the age of 14 he attended the local academy of arts. When the 17-year-old Cucuel was sent to Paris, he entered the Académie Julian and the Académie Colarossi. Then he went to Jean Léon Gérôme at the Académie des Beaux Arts. In 1896 Cucuel returned to the USA and settled in New York. After half a year, when he worked again as a newspaper illustrator, Cucuel went back to Paris to devote himself to art. He spent two years there, and then travelled through France and Italy to study the old masters. In Germany, Cucuel went to Berlin, where he mainly worked as an illustrator. In 1907 Cucuel moved to Munich, the city that should become his home for a long time. There, he joined the artists' group 'Scholle'.

Autumn Enchantment dates from the early days when Cucuel was still entirely under the sway of his friend and fellow painter Leo Putz. Nevertheless, it already contains all the qualities that would later make Cucuel’s reputation as a painter of beautiful women. The fastidious choice of motif in a lush setting is supported by a harmonious composition. The restrained palette is similar to Leo Putz’s, yet fresh and vibrant. On the whole, the composition is well-balanced and homogeneous but none the less piquant for that. At the start of his career, Cucuel conquered a territory as a fief of his own that he long occupied with a steady flow of new compositions informed by the same or similar content. In thus defying the Zeitgeist, Cucuel could rely on a devoted following.

His paintings resemble the French impressionists as to colour and motives. From 1914 to 1918 Cucuel lived in Holzhausen at the Ammersee and later put up studios in Munich and Starnberg. Since 1928 he spent his summers there and regularly lived in New York during the winter until 1934. Because of the beginning of the Second World War Cucuel finally left Germany in 1939. He settled in the Californian town Pasadena, where he led a secluded life until his death in 1954. [KD]
EXPERTISE: This work is accompanied by a certificate of authenticity signed by Helmut Krause, Mörfelden-Walldorf, and dated 10 October 2008. It will be included in the forthcoming catalogue raisonné
PROVENIENZ: Private collection Hesse.

Replication in the opposite direction of the painting "Herbstblätter"
In good condition.