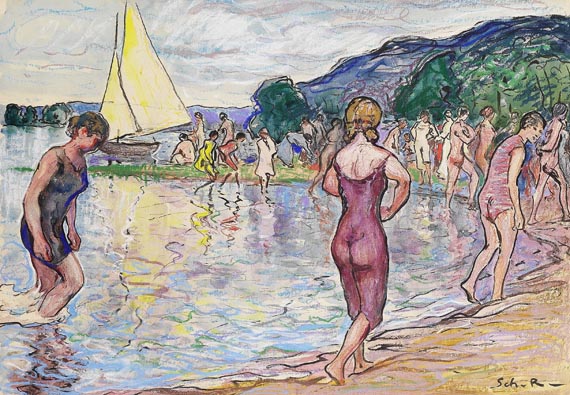 Badende am See. Um 1910.
Watercolour, India ink brush and pastel chalk.
Monogrammed lower right. On light cardboard. 47,5 : 69,5 cm (18,7 : 27,3 in), the full sheet. Paul Schad-Rossa began by studying sculpture at the Nuremberg Art School. Around 1880 he switched to painting after transferring to the Munich Art Academy, where his teachers were Ludwig von Löfftz and, from 1883, Franz von Defregger. During that period, Schad-Rossa worked on commission copying Old Masters. One of his commissions was from the king of Romania. In 1888 Schad-Rossa left the Munich Academy to devote himself to painting outdoors. For the rest of his life, landscapes with a plein-air tendency remained his favourite genre. He found most of his motifs at Wannsee in Berlin, inspired by the lake to produce more and more new work. At the great Berlin art show in 1914, Paul Schad-Rossa was given a room of his own, where he was able to present twenty-three of his paintings. [LB]

In good condition, colours still fresh. With soft ripples due to the technique. Slightly foxmarked, barely noticeable on the front.