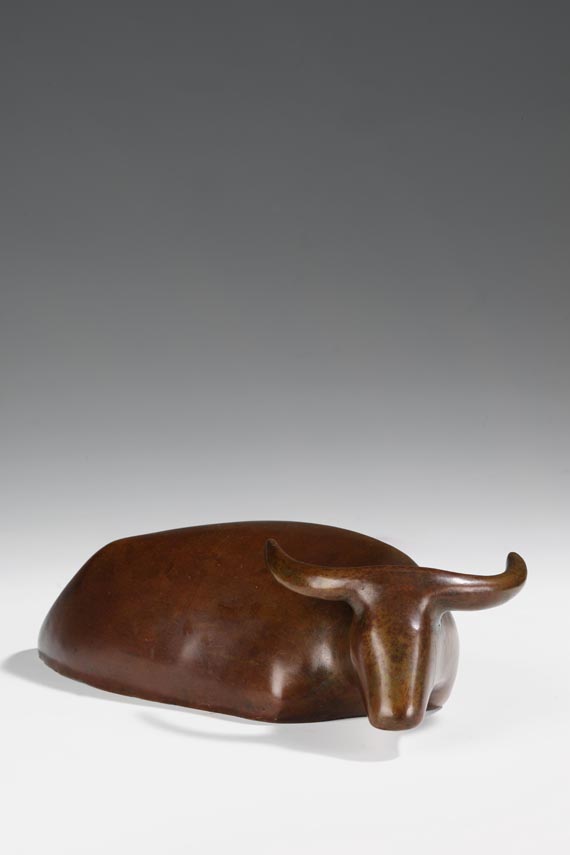 Kleine liegende Kuh. 1928.
Bronze with brown patina.
Schilling 56a. With the artist's monogram. One of circa 14 copies. 6,8 : 27 cm (2,6 : 10,6 in). Ewald Mataré was first taught in his hometown by the painter Eugen Klinkenberg before going to the Kunstakademie in Berlin in 1907. In 1912 Mataré became a master pupil of Arthur Kampf, who was considered one of the best painters of 'official' art. Mataré worked under Lovis Corinth for half a year in 1914, but was not convinced by his teacher's Impressionist style.
After the First World War, in 1920, there was an important change in Mataré's œuvre. Already in his thirties, the artist, who had been classically trained as a painter, turned towards graphic art and sculpture. He became known for his animal sculptures. Instead of a spontaneous expression of subjective experiences and moods Mataré sought clarity and objectivity of form in his sculptures and woodcuts.

The fascination of this piece is the fusion of the bestial and the abstract, which, taken together with subtle handling of surfaces conveys an aura of eternity, of timelessness. No matter from which side Mataré’s sculpture is viewed, harmonious perfection of form is palpably present. Mataré’s pieces in fact invite the viewer to touch them. Looked at from this angle, his animals are sociable creatures yet differ fundamentally from conventional animal sculptures since they are neither cloyingly sweet nor faithfully drawn from nature.

Mataré was appointed to teach at the Staatliche Kunstakademie in Düsseldorf in 1932, but was expelled again in 1933 as a result of Nazi propaganda. All of Mataré's sculptures in public collections were destroyed. He was asked to return to the Akademie immediately after the war. The doors of the Cologne Cathedral were designed by Mataré and made him the best-known sculptor in Germany after the war. Mataré strongly influenced Joseph Beuys who was one of his most famous pupils.
Mataré was awarded the 'Großer Kunstpreis' of the state of North Rhine-Westphalia in 1953 and the 'Großes Verdienstkreuz' of the Federal Republic of Germany in 1958. After numerous one-man exhibitions, the Stedelijk Museum in Amsterdam organised a large retrospective exhibition while the artist was still alive. Ewald Mataré died aged 78 in Büderich near Düsseldorf. One year later the Kunstverein in Cologne commemorated the artist in a large exhibition. [KD]

In good condition.With a few tiny scratches and barely noticeable traces of rubbing.