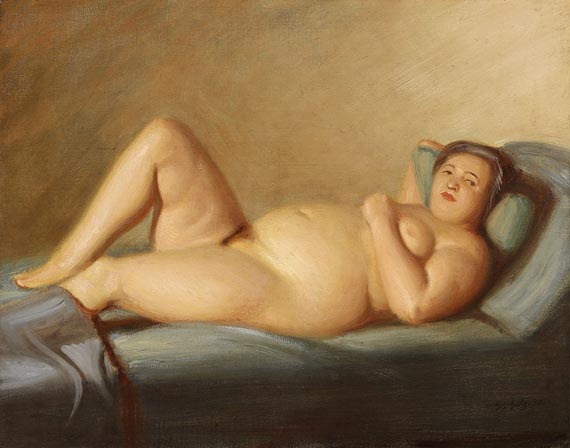 Liegender korpulenter Akt. 1930.
Oil on canvas.
Sternfeld 80. Signed and dated lower right. Dated, titled and inscribed "Nr. 11" on the stretcher and on a label, with the artist's address stamp and the estate stamp as well as an additional label, there with inscription. 53,5 : 67 cm (21 : 26,3 in). It took the rediscovery of a broader circle of 1920s German painters for Georg Scholz, who was a member of the “November Group”, to be made known to the public at large. His celebrated lithograph “Zeitungsträger” [“Newspaper Carrier”], which sheds a glaring light on the crass social inequality of the 1920s, is his best known and most frequently published work. Our comfortably reclining female nude, by contrast, reveals no traces of social criticism of that kind. Here Scholz has indulged a painterly inclination, perhaps dwelling on the firm plumpness of Baroque female bodies or Goya’s The Nude Maja or even Manet’s rather vulgar Olympia. [KD]

In good condition. Smaller retouchings on the body as well as a small retouching upper right. Edges slightly rubbed