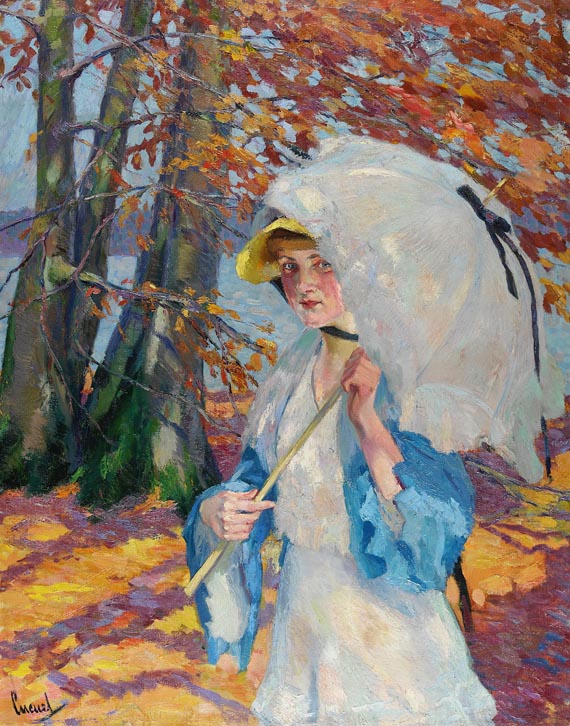 Dame mit Sonnenschirm im Herbstlaub am Ammersee. Um 1914-18.
Oil on canvas.
Signed lower left. Once more signed and with an artist's label on the stretcher. 120 : 95 cm (47,2 : 37,4 in). Edward Cucuel was born the son of a newspaper publisher in San Francisco. Already at the age of 14 he attended the local academy of arts. When the 17-year-old Cucuel was sent to Paris, he entered the Académie Julian and the Académie Colarossi. Then he went to Jean Léon Gérôme at the Académie des Beaux Arts. In 1896 Cucuel returned to the USA and settled in New York. After half a year, when he worked again as a newspaper illustrator, Cucuel went back to Paris to devote himself to art. He spent two years there, and then travelled through France and Italy to study the old masters. In Germany, Cucuel went to Berlin, where he mainly worked as an illustrator. In 1907 Cucuel moved to Munich, the city that should become his home for a long time. There, he joined the artists' group 'Scholle', which was dominated by the outstanding artistic figure Leo Putz. The group took care of him in artistic matters. Furthermore, Cucuel took part in the exhibitions of the Secession in Munich. In 1912 the artist successfully exhibited some of his works in Paris.

Cucuel and Leo Putz became such good friends that they soon opted for working together. The motifs they were enthusiastic about were similar and both subscribed to a cultured style of painting informed by influences absorbed from German Late Impressionism. Cucuel’s models were almost always young women, who move easily. Cucuel was concerned with the impact made by composition; even the subtlest nuances of his colours are vibrant. Painting outdoors, which he undertook at Leo Putz’s suggestion and engaged in with him, led Cucuel to a free and spontaneous handling of colour, leaving little scope for deliberately sought balance in his palette. The paintings Cucuel produced during those productive years of his friendship with Putz, particularly those which, like our picture, were painted on the lakes in the foothills of the Bavarian Alps, breathe freshness of inspiration and are notable for masterly handling of the medium and assured composition.

From 1914 to 1918 Cucuel lived in Holzhausen at the Ammersee and later put up studios in Munich and Starnberg. Since 1928 he spent his summers there and regularly lived in New York during the winter until 1934. Due to the beginning of the second word war, Cucuel finally left Germany in 1939. He settled in the Californian town Pasadena, where he led a secluded life until his death in 1954.[KD]
EXPERTISE: This work is accompanied by a certificate of authenticity signed by Helmut Krause, Mörfelden-Walldorf and dated 26 October 2008. The work will be included in the forthcoming catalogue raisonné
PROVENIENZ: Private collection South Germany.