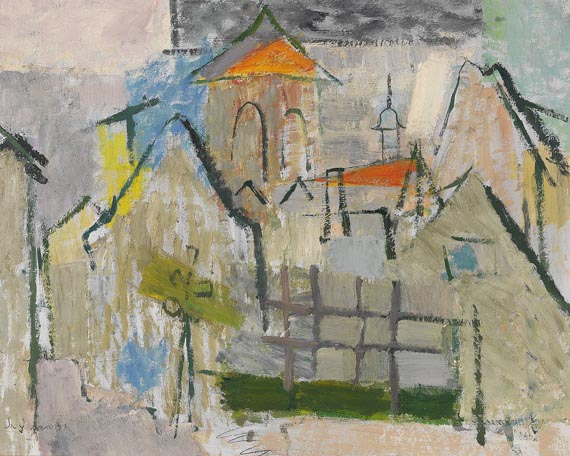 Dorfansicht. 1932.
Oil and chalk.
Signed and barely legibly dated lower left. On light cardboard. 40 : 50,5 cm (15,7 : 19,8 in), the full sheet. From 1910 Hans Szym served an apprenticeship as a lithographer and worked as a draughtsman in the decorative arts. After the first world war, he studied at the Berlin Applied Arts Museum and freelanced as an artist from 1927. Made a member of the Berlin Secession in 1929, he was proposed in 1932 for the Great State Prize awarded by the Berlin Art Academy but it was withheld from him for political reasons. Forbidden to show his work, he was not free to resume his career as an artist until 1946. “His pictures are distinguished by delicacy and smouldering colour that are rarely encountered in [the German art of his time]. Even today he is still misunderstood - even though one might think that such a thing could no longer happen.” (Albert Buesche, in: Kunst in Berlin 1945 bis heute, Stuttgart 1969, p. 215). [NB]

The front of the edges firmly mounted behind passe-partout as well as minimally unevenly trimmed.