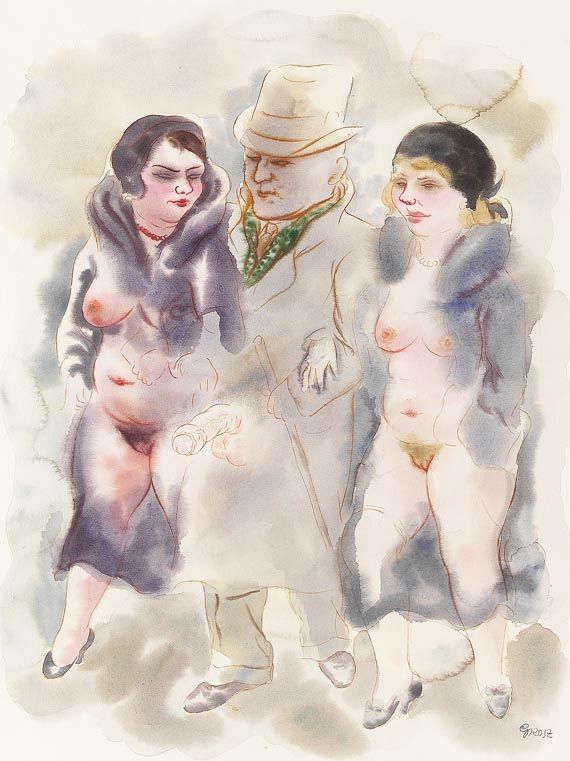 This work's authenticity has kindly been confirmed by Mr. Ralph Jentsch, Rome.

George Grosz - born as Georg Ehrenfried Groß in Berlin in 1893 - grew up in the Pomeranian town of Stolp and captured views of its architecture in studies as early as 1907/08. After studying for two years at the Royal Art Academy in Dresden, Grosz transferred in 1911 to the Berlin Applied Arts School, where he became a pupil of Emil Orlik’s. The street and café scenes so typical of Grosz made their first appearance in sketchbooks. In 1913 the artist spent some months in Paris. In 1914 and again in 1917 Grosz was conscripted and served briefly but was soon discharged as unfit for active duty. During the war years, literary essays and drawings by Grosz were published in various journals that made Grosz well-known in the art world. In 1919 Grosz, Hausmann and Heartfield organised the first Berlin Dada fair. A Grosz portfolio shown there under the title “Gott mit uns” involved him in a lawsuit for libelling the Reichswehr (because that was the motto inscribed on soldiers’ belt buckles in both world wars). He worked as an illustrator in the 1920s, for, among other publications, Flechtheim’s "Querschnitt" , the satirical Communist weekly "Der Knüppel" and, from 1926 to 1932, the celebrated satirical magazine "Simplicissimus" . Moreover, Grosz collaborated on several new journals. In 1923 Grosz was involved in another law suit for “offending public morals” in his “Ecce Homo” sequence. There was a third lawsuit in 1928, in which Grosz was accused of blasphemy in his “Hintergrund” cycle.
Rendering erotic fantasies in visual terms is an integral part of George Grosz’s work. Bringing off a precarious balancing act between social satire, pornography and sexual libertinage, George Grosz produced a number of works that in some way or other deal with sexual obsessions. Vigorous manhood, which is here displayed proudly and visible to all, flanked by two inviting females has sprung from erotic fantasies of the kind haunting daydreams and not just the artist’s.
In 1932 Grosz was a visiting lecturer at the Art Students League of New York and moved to the US in 1933. He taught at the Art Students League until 1955 but opened an art school of his own on the side. In 1937 two hundred and eighty-five works by Grosz were removed from German museums. Some were shown at the notorious exhibition of “degenerate art”. Grosz was deprived of his German nationality but became a US citizen. He did not return to Berlin until 1959, the year he died. [KD].

In excellent condition, especially in terms of colors. With minor mount staining. With a mounting tape in places of verso, minimally showing through to recto.