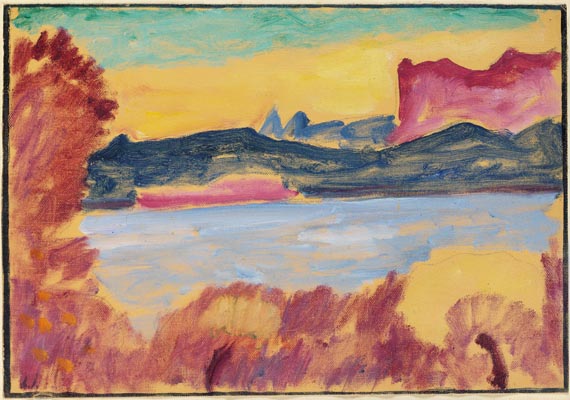 Alexej von Jawlensky began studying art in St Petersburg with Ilya Repin in 1889 before moving to Munich in 1896, where he attended a private art school. In summer 1908 Jawlensky worked for the first time in Murnau with Wassily Kandinsky, Marianne von Werefkin and Gabriele Münter. The idea of founding a “New Munich Artists’ Society” was born in Murnau and the four painters joined forces with other Munich artists to co-found it in 1909. The group’s first show was held in Munich in December that year. Two years later “Der Blaue Reiter” was the next grand idea for artistic collaboration to be realized. In 1913 Jawlensky showed work at the First German Autumn Salon produced by Herwarth Walden in Berlin.

On the outbreak of the first world war, Jawlensky was deported from Germany as a Russian national and forced into exile in Switzerland. He settled with his family in St. Prex on Lake Geneva. His years at St. Prex were of crucial importance to Jawlensky.The rather cramped conditions under which he lived and the trauma of exile left traces on the work that he did in those and later years. Formats diminished in size and Jawlensky now concentrated on just a few motifs, among which the view from his flat on the lake played a major role. As time passed, he would vary the theme and subject the statement he made with it in form and palette to unusual figurations.
The present landscape is one of the few Jawlensky did in landscape (horizontal) format that abided by the conventions of landscape. Yet, at least as far as the palette is concerned, Jawlensky resorted to unconventional means even here; the mauve tones in the foreground shading almost into purple contrast with cold blues. The economical yet poised handling of color attests to a concentration of visual powers peculiar to Jawlensky, which are most notably expressed in his Meditations. In the present composition, the artist is not much concerned with topographical accuracy; on the contrary, as throughout his painterly œuvre, he has sought to visualize a mood that stirred him, to which he lent painterly expression in his own inimitable way.

After that Jawlensky settled in Wiesbaden but in 1933 he was forbidden by the National Socialist regime to show his work. Seventy-two works of Jawlensky’s were confiscated as “degenerate” in 1937. Four years later, in 1941, Jawlensky died in Wiesbaden. [KD].