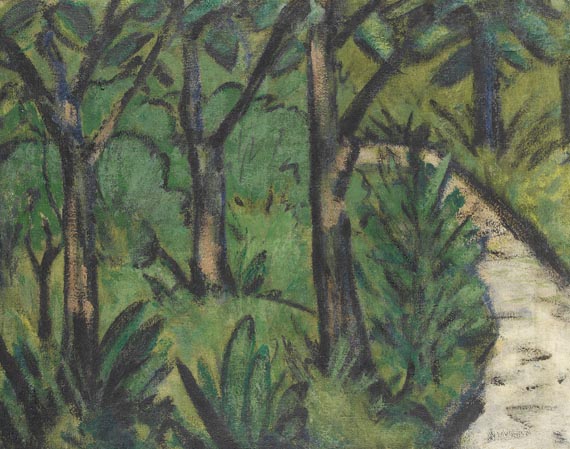 Born on 16 October 1874 in Liebau in the Giant Mountains, Otto Mueller spent his early years with his mother, brothers and sisters at his grandparents' Liebau estate. In 1882 he moved away to join his father in Görlitz, where he attended primary and later the higher secondary school. Between 1890-92 he trained in lithography in Görlitz and Breslau. Following his practical training, he studied at the Dresden Art Academy under Georg Hermann Freye and, briefly, Carl Ludwig Noah Bantzer from 1894 until, it is believed, 1897. In 1898/99 Mueller and his friend Paul Kother went to Munich to study. After an unveiling attempt to be accepted into the class of Franz von Stuck, he decides to educate himself and moved to the south of Munich. In autumn 1899 he set out by bicycle for Dresden, where he would mainly work in the city and its surrounding region up until 1908, when he moved to Berlin. There he met Wilhelm Lehmbruck and Erich Heckel, member of the artist group 'Brücke'. He joined this artist group in 1910. His artistic origin lies in Art Nouveau, which explains the decorative and linear aspect of his art. The way he emphasized the silhouette and the classical, elegant and graceful appearance of his figures reveal another important influence: Wilhelm Lehmbruck. Mueller's style underwent a significant change when he turned towards Expressionism. His forms were now broader, the contours more emphasized. In his damped and earthy palette he began painting the typical subjects – pale, melancholic young female nudes in an open, calm and simplified landscape.

However, the plain landscape depiction without any nudes is not rarely found in the oeuvre of Otto Muellers. The thick forest – similar to a jungle, impermeable and apparently unaffected by humans – clearly reflects Mueller‘s longing for a pristine idyll. The small creek, meandering through a luscious greenery, seems to be in such a remote location that no human being would ever go there. The composition seems to rest in itself, without any artificially placed highlights and spectacular vistas, interpreted in hushed shades of green, which are merely interrupted by accents in marine blue. Otto Mueller sees nature from an ideal perspective, an untouchable paradisiacal place. If man dared entering this place, it should only be in his most native and innocent form.

Mueller is an important representative of German Expressionism, even though his ideas also differed considerably from those of other leading Expressionists. He focused on a harmonious simplification of form, color and contours rather than on passion. After serving in the military from 1916 to 1918 Mueller follows a call to the Breslau Academy where he taught up until his death in 1930. [SM].