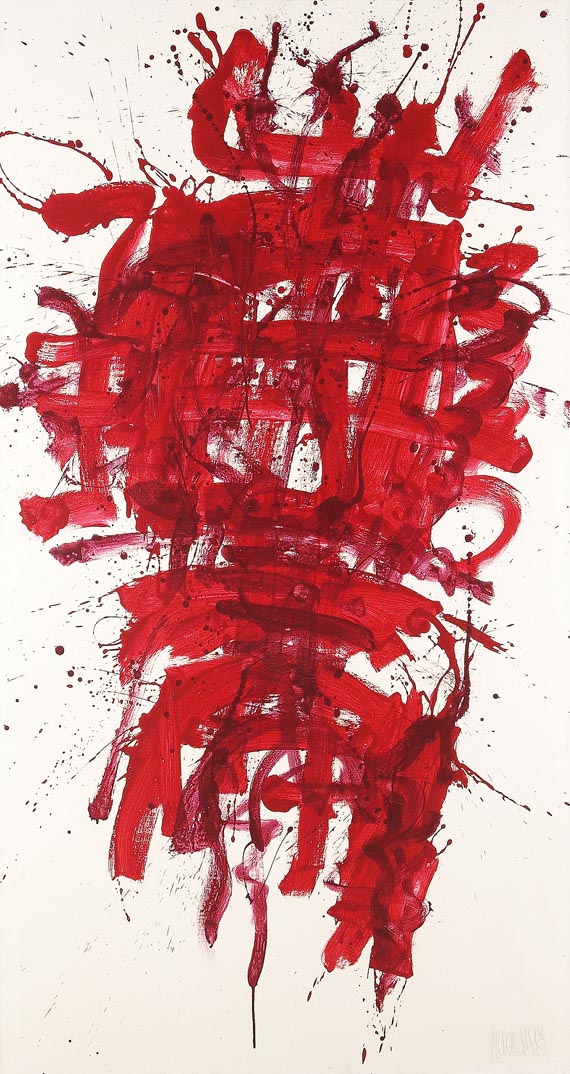 Markus Prachensky was born in Innsbruck on 21 March 1932. After finishing high school he moved to Vienna in 1952, where he began to study architecture under Lois Welzenbacher at the Academy of Fine Arts. In parallel Prachensky studied painting as of 1953. Together with Wolfgang Hollegha, Josef Mikl and Arnulf Rainer, Prachensky was a co-founder of the 'Galerie nächst St. Stephan' in 1956, whose principal patron was Monsignore Otto Mauer. As early as in 1957 the group was introduced to the public at a large-scale Viennese Secession exhibition and Prachensky became a member of the Secession. While staying in Paris in 1958, Markus Prachensky met contemporaries such as Jean Arp, Pierre Soulages, Yves Klein and Sam Francis. The first performance of 'Peinture liquide' was put on at the Theater am Fleischmarkt in Vienna in 1959 and he participated in the documenta II in Kassel. In the early 1960s Prachensky spent quite some time in Berlin and Stuttgart, where he did the sequence 'Rot und Rot - Berlin' in 1964-66 as well as the Solitude pictures.

While his early works still follow strictly geometric compositions, Prachensky developed an unmistakably expressive Tachist style that is geared at the international Informel since the 1960s. Prachensky discovered his liking for the color red and declares it to be his favorite color. Red is the perfect means of expression for the artist, in order to convey what he feels and the unconscious to the canvas, however, without exerting any rational control. In doing so he emphasized the spontaneous aspect of painting. “I can see the possibilities of our painting – in line with those of the humanities and technology – in a composition of intuitive powers gained through extreme concentration and in retrieving, feeling and finding a spiritual reality beyond the three basic dimensions.“ (translation of quote from \ul\cf3 www.prachensky.net) . With its dynamic strokes of the brush and its explosive splashes of paint in various shades of red, this painting clearly reflects these tendencies in the work of Prachensky.

In 1967 Markus Prachensky went to New York, where he met Clement Greenberg. A year later Markus Prachensky moved to the US A and set up a studio in Los Angeles, but he also stayed in Palm Springs and traveled to Mexico. Returning to Europe in 1969, Prachensky worked at first in Hanover, but from 1971 he again worked and exhibited in Vienna. In 1972 Markus Prachensky was commissioned to execute an enormous tapestry for the Congress House in Innsbruck. Since 1975 Prachensky has traveled extensively over long periods through the Mediterranean region, visiting Italian archaeological sites, which he found to be a source of inspiration. Until the mid-1970s Prachensky's painting had been concentrated on shades of red, but impressions gleaned in Italy enlarged his palette to include black and yellow. Mediterranean landscapes, the colors and forms of Italy, were at the core of the sequences he painted during the 1980s and 1990s. From 1983 until 2000 Prachensky taught and headed the master classes for painting at the Vienna Academy of Art. In 1992 Markus Prachensky was awarded the Medal of Honor in Gold of the City of Vienna and in 2003 he received the Prize of the City of Vienna for the Visual Arts. Large-scale retrospectives of Markus Prachensky's work were mounted at the Hanover Kunstverein in 1970, at the Vienna Academy of Art in 1979, and, on the occasion of Prachensky's seventieth birthday in 2002, at the ‘Österreichische Galerie im Oberen Belvedere‘. In 2003 Pachensky's work was displayed at the Galerie Ulysses in Vienna and in the Essl Collection, Klosterneuburg. Markus Prachensky is regarded one of the most important exponents of informal art in Austria. [SM].