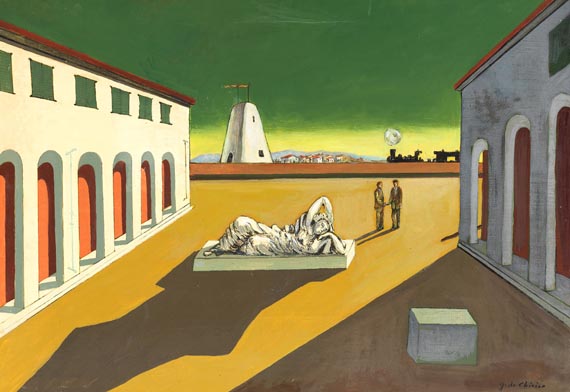 This work is accompanied by a photo expertise of Isabella de Chirico, Rome, from 10 June 1978.
Also with a writing by Prof. Paolo Picozza, Fondazione Giorgio e Isa de Chirico, from 27 February 2009, which confirms the technique as well as the photo expertise mentioned above.

Giorgio de Chirico first studied painting and drawing at the Polytechnicon in Athens before he continued his studies at the Academie opf Fine Arts in Munich from 1906 to 1909. Here de Chirico dealt with Friedrich Nietzsche's philosophy and Arnold Böcklin's and Max Klinger's fantastic image world, which strongly influenced his classic-mythologic early works. In 1911 de Chirico went to Paris for four years. A stay in Turin inspired him to paint dreamlike city landscapes, which were formed by a strange atmosphere of silence and desertion and only livened up by statues and the so-called 'manichini' [jointed dolls]. During his military service in Ferrara, de Chirico met the Italian painter Carlo Carrà in 1917. Together they develop the aesthetic of the 'Pittura metafisica' and de Chirico's main works of this stylistic period like e.g. 'Ettore e Andromaché' (1917) and 'Le Muse inquietanti' (1918) came into existence. After the end of the war de Chirico dissociated himself from his metaphysical works, turned to the highly renaissance-like classic of Novecento and learned the old master technique of panel and tempera painting during stays in Rome and Florence in 1920/21. In 1925 de Chirico moved to Paris once again, where his metaphysical works found the highest approval of the surrealists. Since 1930 de Chirico lived alternatingly in Florence, Milan and Paris, before finally settling in Rome in 1944. In the 1950s and 60s de Chirico often resorted to his metaphysical period and works from the 1920s, made replicas and bronze statues from his Ferrara-period and carried on the series of self-portraits.

Painting over printed models was already quite common at the end of the 19\up5 th century. In order to meet increasing demands, this technique was executed in a serial picture production and was authorized with the artist’s signature. De Chirico made a large number of variations of the "Piazza d'Italia", one of the his favorite motifs. The basic concept is always the same, a stage-like architecture and a sculpture recumbent or standing on a base. The Greek native Chirico created a new Hellas in Italy with his ideas. Surrealism recedes behind antique forms in his compositions. A sort of mystic atmosphere is created by referencing different European cultures, the ancient world, the Middle Ages and the modern age at the same time, thus attaining a sort of abeyance.

De Chirico is counted among the central figures of 20th century art. As a precursor of the 'Pittura metafisica' he strongly influenced the following style developments of Surrealism, New Objectivity and Magic Realism. In 1974 Giorgio de Chirico was admitted at the Académie des Beaux Arts in Paris and received the Großes Bundesverdienstkreuz (Cross of Merit ) of the Federal Republic of Germany in 1976. The artist died in Rome in 1978. [KD].