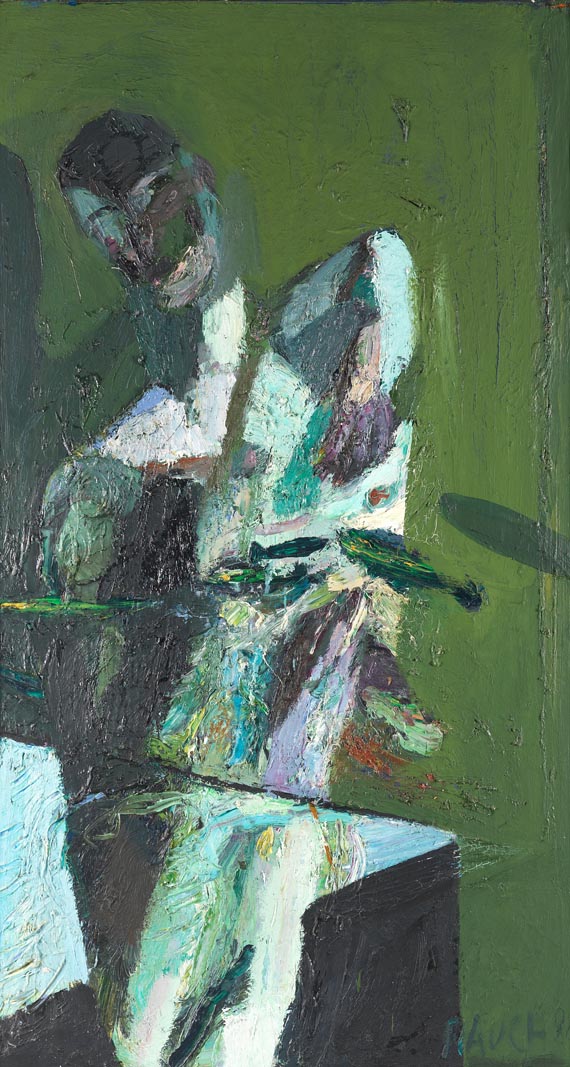 PROVENANCE: Private collection Frankfurt a.M. (acquired from the Galerie am Sachsenplatz, Leipzig in 1988).

His years of study with Arno Rink and Bernhard Heisig are a time of quest for Rauch. Rauch did not only closely examine the work of his Leipzig teachers and contemporaries, but was also occupied with the figure slashing Neo-expressionism of Bacon. In his works originating in the 1980s an expressive-pastose color application plays a major role, which was to be increasingly dominated by the figure until the end of the decade. In the painting "Der Fänger" (The Catcher ) the figure, with its pastose color parts that are mainly emancipated from the internal structure of the human physiognomy, seems to be peeling itself out of the color surface. Just as it is the case with his later works, the depicted subject in this work does not entirely open up to the observer, the action of the "Catcher " as well as the reflection in the lower half of the painting remains incoherent and cryptic. Rauch once described the way to his historic Surrealism of the 1990s, of which this work is a remarkable example, as follows: The way it happened was because there was a time when everything was pieced together from evidence, as if I did not play any role at all in this, as if it just arose in front of me, between me and the canvas." (translated quote after: www.eigen+art.com/user-cig-bin/files/nr_gespraechprag.pdf, issues 21 October 09). After the German reunification Neo Rauch began to follow a new concept, which reflected history and contemporary culture in an enigmatic way, making the precursor of the "New Leipzig School" one of the most successful artists of the international art scene. [JS].