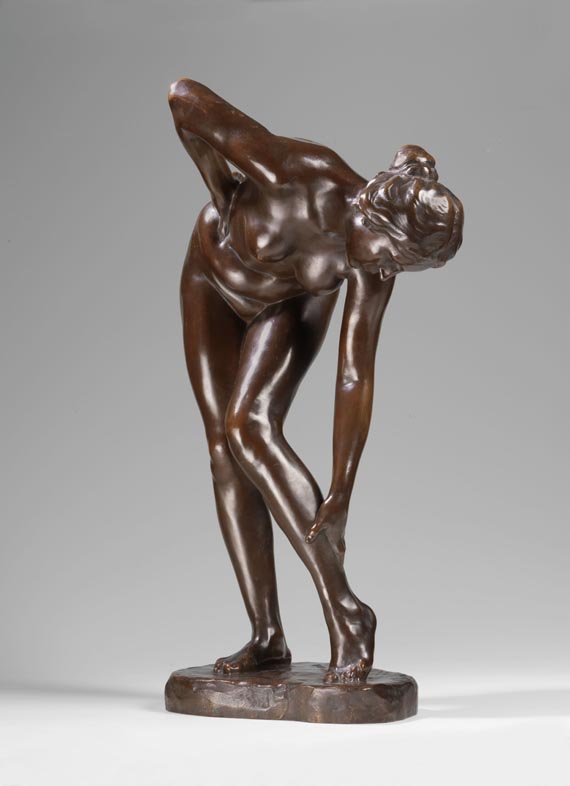 This work is accompanied by an expertise from Prof. Dr. Dietrich Schubert, Heidelberg, from 25 August 2009, who classifies the date between 1905 and 1909.

The sculptor Wilhelm Lehmbruck is considered a pioneer of 20th century sculpture. His artistic career began in 1895 when he attended the school of applied arts in Düsseldorf. After his father's death in 1899 he briefly worked as an assistant in a sculptor's studio, but continued his artistic training in 1901 at the art academy in Düsseldorf. As Karl Janssen's master pupil he was awarded scholarships and the free use of a studio. His first works are influenced by Constantin Emil Meunier and Käthe Kollwitz. Their social subjects are inspired by early works of Emil Zola and Gerhard Hauptmann. The student was greatly impressed by the first large Rodin exhibition in Düsseldorf in 1904.

The work “Badendes Mädchen“ (Bathing Girl) made under the influence of Naturalism in 1902, was so successful that a remarkable number of casts was made around the statue’s time of origin. Additionally, there are also gypsum casts in existence. The observer feels a merry and light-hearted physicalness, which gives a balanced and room-filling idea of Lehmbruck’s feel for forms at the time the plastic was made. The soft curves of the limbs compliment the bathing girl’s calm posture and call reminiscence of the Degas‘ great late pastel drawings of bathing women.

Lehmbruck’s further development was determined by his artistic relationships: When Lehmbruck went to Paris in 1910 he met Matisse, Archipenko, Brancusi and Modigliani, who inspired his move towards Expressionist sculpture. Lehmbruck exhibited a 'Standing Female Figure' and the 'Kneeling Woman' at the 'Salon d'Automne'. In 1911/12 he shows works at the 'Salon des Indepéndents' and the 'Sonderbund-Exhibition' in Cologne. The artist moved to Berlin at the beginning of the war. He worked as a medical orderly in a field hospital in 1915/16. Shocked and disgusted after this military service. he spent the two last war years in Zurich. He returned to Berlin in the winter of 1917 as a broken man and committed suicide in 1919. While his early Parisian works still reflect Maillol's heavy sculptural volume, Lehmbruck's figures gradually abandoned the classical style and became more expressive and abstract. [KD].