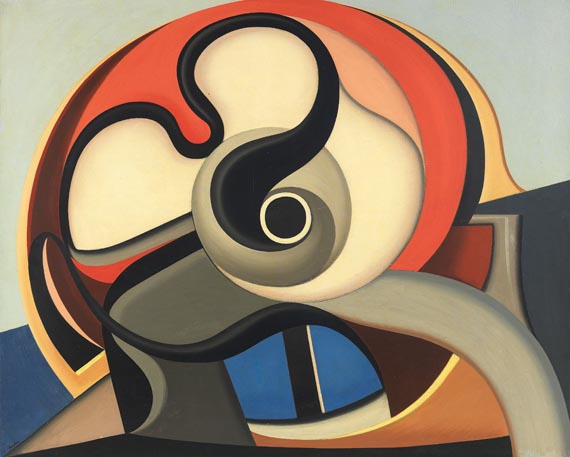 The entwined forms omnipresent in Herbin's pictures in those days, still have an air of the concrete, which will remain the predominant object portrayed up until the early twenties. Herbin consistently follows the path to abstraction and finally attains a geometric use of forms that will be predominant in his late work. "The way that led to abstract painting became apparent only gradually, it went from disarrangement to distinctiveness, from contradictions to unity, to the complete disengagement from the object, and, above all, to the most important aspect of the liberation of painting, that is the absolute separation of painting and sculpture." (Auguste Herbin, translation of quote after: Exhibition catalog part I. Auguste Herbin, 1882 - 1960. Ölbilder, Gouachen, Aquarelle, Galerie Bargera, Cologne 1974, no page). [KD].