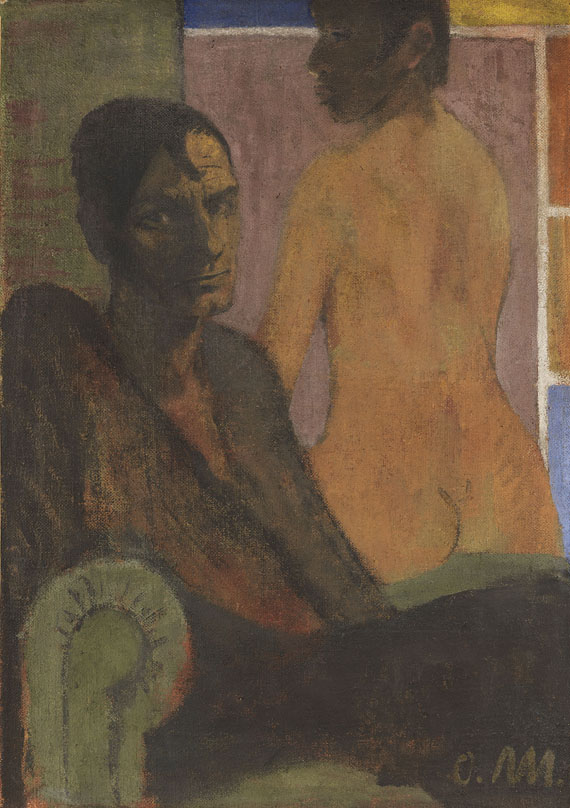 LITERATURE: Mueller, Emmy. Erinnerungen an Otto Mueller. Typoscript, early 1950s, page 30.
Von Lüttichau, Mario Andreas. Otto Mueller, Ein Romantiker unter den Expressionisten. Cologne 1993, p. 88 with illu. 49 on p. 90 and on p. 162 with illu. 83 with a view of the commemorative exhibition's venue, Kronprinzenpalais in 1931, showing the self-portrait with rear nude above a fireplace in the exhibition hall.

Born on 16 October 1874, Otto Mueller studied at the Dresden Art Academy between 1894 and 1897. After a stay in Munich he lived in Dresden and its surroundings as of 1899. In 1908 Mueller went to Berlin where he met W. Lehmbruck and E. Heckel, member of the artist group "Brücke". In 1910 he joined the artist association. Mueller's style underwent a significant change when he turned towards Expressionism. His forms were now broader, the contours more emphasized.In a subdued and earthen palette he rendered his typical subjects- pale, melancholic nudes in an open and calm strongly simplified landscape. Mueller is an important representative of German Expressionism, even though his ideas also differed considerably from those of other leading Expressionists. After spending two years in the war, from 1916 to 1918, he was appointed professor at the Breslau Academy.

In his oeuvre of paintings Otto Mueller shows a strong preference for double portraits, he depicts the almost life-size female nudes as individuals with hardly any relation to the second person depicted. For their lack of action they seem to be self-immersed beings, their spiritual condition remains obscure. A sensual- erotic component is rare, but yet, Mueller's double nudes live on a strange tension between the two models, trying to fathom it makes for the compositions special appeal. This is also true for this painting, the inner relation between the two can only be guessed. Otto Mueller depicts himself in a moment of backpedaling, the questioning look into a remote distance, without a clear reference to his female companion. However, simply for her presence she adds peculiar tension to the work. The person presumably is Elfriede Timm, his former student and third wife. The overlapping components of this late work show an artist with yet undiscovered emotions, their deeper meaning can only be revealed inwardly. In this self-portrait Otto Mueller goes far beyond the inventory of his paintings. The exploration of the self and related fundamental questions regarding life exceed the illustrative factor, adding inner dignity and completeness to this composition.

Mueller was quite popular with both colleagues and students at the Breslau Academy, the atmosphere in Breslau, however, was far more conservative than in Dresden and Berlin. But Otto Mueller time and again dropped the idea of leaving, because he felt that his activities at the Breslau Academywere important. In 1930 the artist died of a long-term lung disease.
This painting was shown in a commemorative exhibition as early as in1931, mentioning the Breslau governmental architect Richard Ehrlich (*1866 - + 1931) as owner. After intensive research, Ketterer Kunst, in agreement with the consignor, was able to trace the heirs of Richard Ehrlich. A contractual agreement stipulating profit participation in proceeds realized by the auction of Otto Mueller's self portrait at Ketterer Kunst was found. Ketterer Kunst is grateful to the consignor for making this regulation possible despite his good faith and a legal situation that speaks for him.