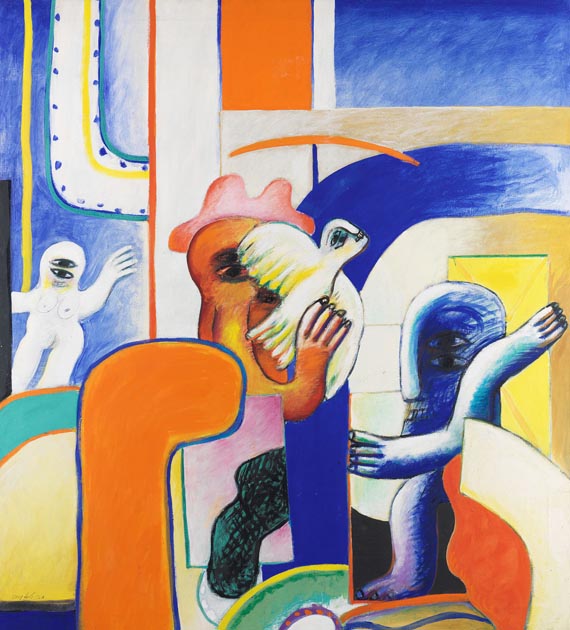 Horst Antes was born in Heppenheim on the Bergstraße on October 28, 1936. After completing high school he studied under the important woodcutter HAP Grieshaber at the Karlsruhe Academy of Fine Arts from 1957 to 1959. Despite the spirit of the age, Grieshaber still held on to figuration. But yet, Antes‘ creative starting point can be located mainly in informal art and its gestural expression. One of his most important role models was Willem de Kooning, who combined informal and figurative elements in his work. In 1960, he gradually thinks up the figure of the 'Kopffüßler' (literal translation: Head-Footer) from vehemently jotted color structures. Ever since he as been occupied with this figure in countless variations and versions as well as different artistic techniques. The artist was given the Villa-Romana-Prize in Florence in 1962 and the Villa Massimo scholarship in Rome in 1963. During this period his liking for a profile view consolidated, however, it was abandoned later on and color was subordinate to form. By 1963 his 'Kopffüßler' was fully developed in its stylistic and contextual premises and became also compulsory for his sculptural work, which began the very same year.

The 'big blue picture' is affected by its coloring. The multilayer color sphere, characteristic of those days, and the figure's acting therein, are of a strong coloring. The titular color blue, slightly shaded like a sky, makes for the background, it is effectually incorporated into the spatial structure in the picture's center. In their intensity, figures and elements in the "Großes Blaues Bild" stand equally side by side with the spatial composition. The "Head-Footers" are playfully integrated into the picture and allow several possible lines of interpretation. Antes attains calmer compositions in his later works.

From 1965 to 1971 Antes teaches at the Karlsruhe Academy, intermitted by a guest professorship in Berlin in 1968. In 1984 he again accepts a post at the Karlsruhe Academy. The city of Stuttgart awarded him the Hans Molfenter Prize in 1989. Since 1990 the artist has been living and working in Karlsruhe, Florence and Berlin. Antes' oeuvre includes not only paintings and graphic art, but also sculptures in public spaces. His works are exhibited throughout the world and are represented in all of the most important German collections, for instance in the Kunsthalle Hamburg, the Museum Ludwig in Cologne or the Nationalgalerie Berlin. [EH].