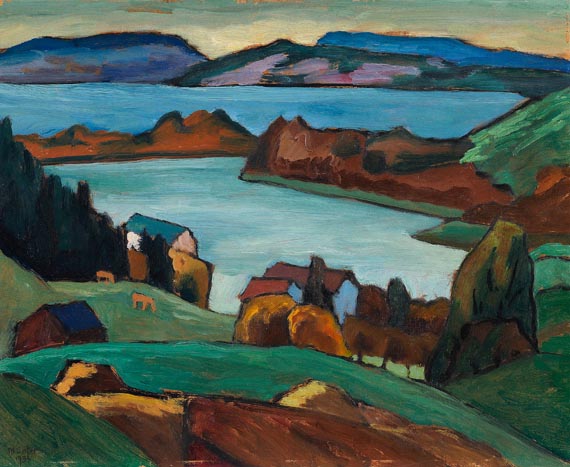 The work is registered at the Gabriele Münter and Johannes Eichner Foundation, Munich.

Gabriele Münter received her first art lessons at the 'Damen-Kunstschule' (Ladies Art School) in Düsseldorf and then attended the Society of Female Artists as a pupil of M. Dasio and A. Jank pupil. Then she went to Munich where she visited the private art school 'Phalanx' which was run by Wassily Kandinsky. In 1904 Münter and Kandinsky began travelling together: to Holland, Italy, France - where they met Rousseau and Matisse - and elsewhere. Stylistically she now distanced herself from Impressionism and her works began showing Fauve and Expressionist influences. In 1908 she and Kandinsky began leading a calmer life in their apartment in Munich. They often met with Klee, Marc, Macke, Jawlensky and Marianne von Werefkin. The country house Münter bought in Murnau provided an ideal working environment. In 1909 the artist began making reverse glass paintings, a medium which would later also be adopted by Kandinsky, Marc, Macke and Campendonk. Münter was a member of the 'Neue Künstlervereinigung München' (‘New Munich Artist’s Association’) for two years and in 1911 she joined the 'Blaue Reiter', the artist’s group founded by Kandinsky and Marc. She was interested in Kandinsky's development towards abstract art, but her own works continued to be figurative. Her landscapes, figurative scenes and portraits show a reduction to the essential with an inclination towards humorous characterization. When war broke out, Münter and Kandinsky at first moved to Switzerland. Münter, however, decided a year later to go to Stockholm, where she separated from Kandinsky. In late autumn 1917 she moved to Copenhagen. She traveled a lot during the 1920s and spent some time in Munich, Murnau, Cologne and Berlin. The breach with Kandinsky led to a major creative block and her art did not gain a new spirit before the 1930s. After 1931 she spent most of her time in Murnau and Munich.

Gabriele Münter gave her very own mark to the landscape at the foothills of the Alps that she was surrounded by. The Staffelsee with its picturesque bays offered numerous perspectives that Münter captured in different seasons. Her compact style with a focus on contours accommodated her intention to add a particular expression, which is defined by a certain melancholy, to the landscapes. In doing so Münter employed a palette of subdued colors. In terms of their originality, Münter’s landscapes of the Staffelsee occupy a special realm in her œuvre. The fact that she made various similar depictions of one and the same motif is also proof of how much she valued the landscape.

In 1956 she received the Culture Prize of the City of Munich. The year 1960 saw the first exhibition of Münter's work in the US, followed in 1961 by a large show in the Mannheim Kunsthalle. The artist died in her house at Murnau on 19 May 1962. [KD]. 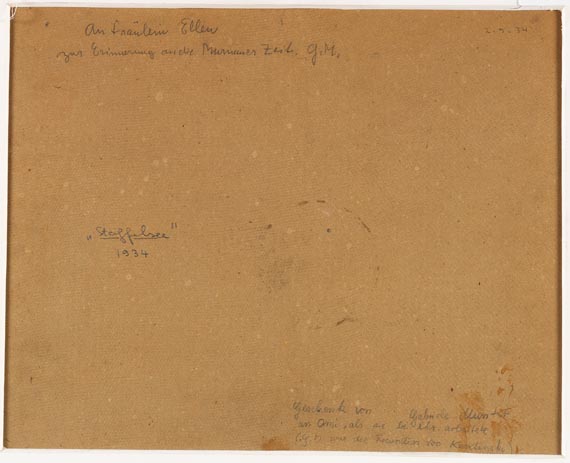 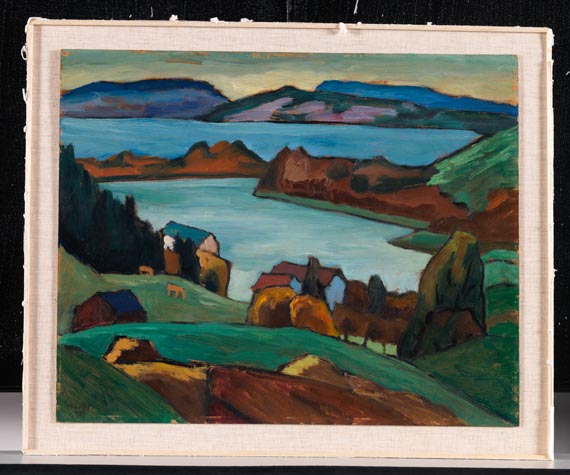