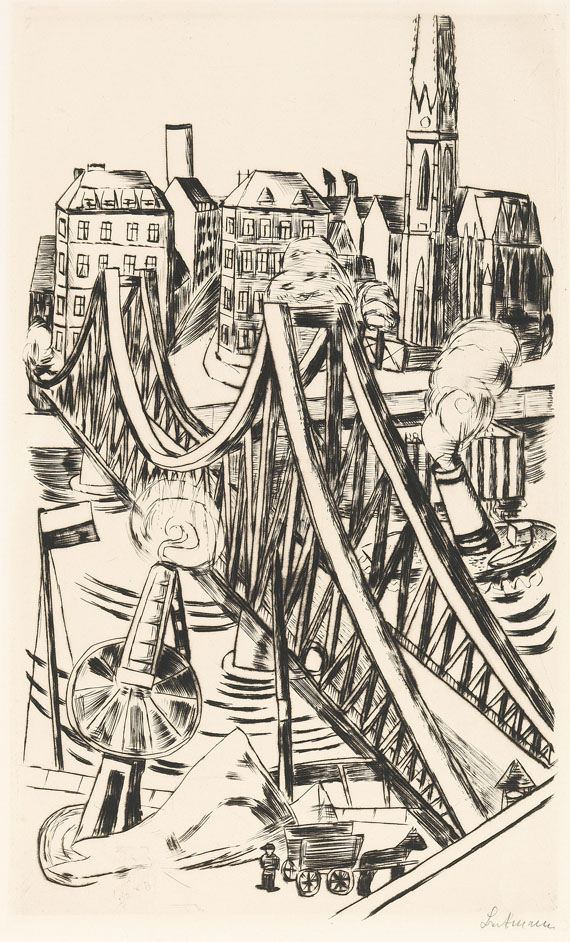 During World War I, in which Beckmann served as a paramedic, he tried to handle the horror in form of drawings. Returning from the war, Beckmann made less drawings but increasingly turned to etchings. The linear medium seems to match the artist’s new and matured view on reality. Additionally, it allows him to apply a style in which the reduction of the form and a concentration on a striking acuity find their expression. In his studio on the Schweizer Straße, near the “Eiserner Steg“, Beckmann set up his own press on which he made particularly fine and burred impressions. In the rare sheet with the “Groosse Brücke“ this technical mastery is combined with Beckmann’s cool and dissecting view on reality. The man in the center of this compositional masterpiece of a city view seems small and puppet-like.

With the success of the National Socialists the artist was increasingly defamed and finally dismissed from his teaching post. His works were removed from public collections in Germany. Political pressure forced him to emigrate to Holland in 1937 and to the USA in 1947 where he died on 27 December 1950 in New York. [JS].