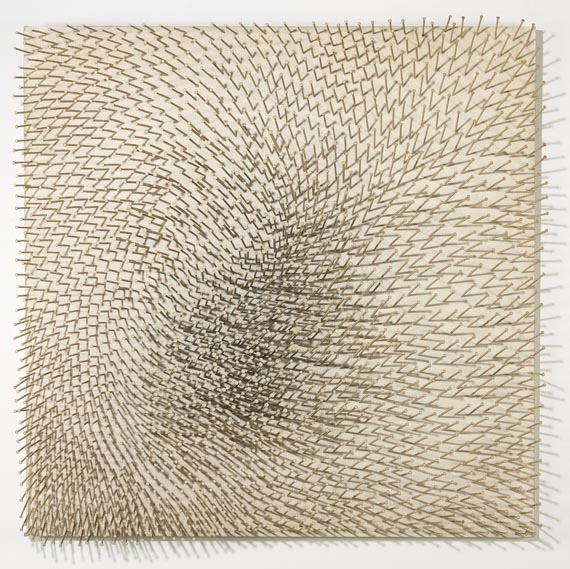 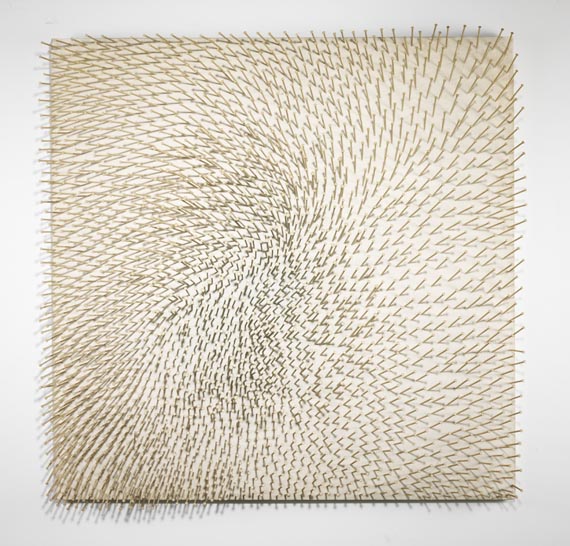 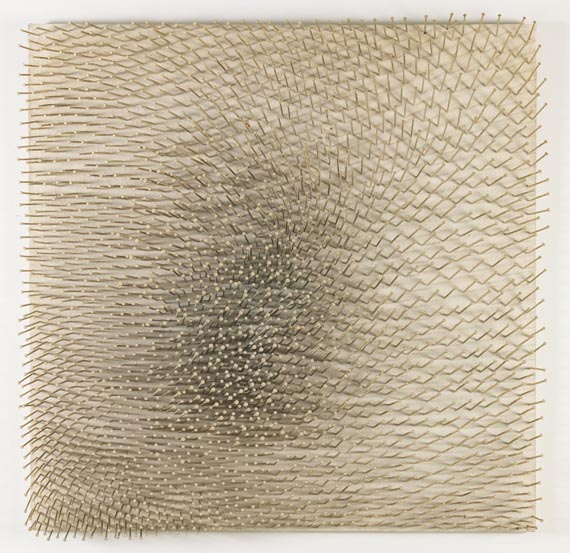 Accompanied by a photo expertise from Prof. Günther Uecker, 2010.

Günther Uecker was born in Wendorf, Mecklenburg on 13 March 1930. He began his artistic education in 1949 when he took up studies at Wismar. He then went to the art school in Berlin-Weißensee and in 1955 to Düsseldorf. Here Uecker studied under Otto Pankok at the Kunstakademie where he has also been teaching since 1974. He made his first nail pictures towards the end of the 1950s. Uecker met the group ZERO with Heinz Mack and Otto Piene in 1960, artists who propagated a new beginning of art in opposition to the German Informel. He occupied himself with the medium of light, studied optical phenomena, series of structures and the realms of oscillation which actively integrate the viewer and enable him to influence the visual process by kinetic or manual interference. Uecker, Mack and Piene began working together in joint studios at the Stedelijk Museum in Amsterdam in 1962 and installed a 'Salon de Lumière' at the Palais des Beaux-Arts in Paris. Other 'light salons' followed in Krefeld and in Frankfurt. Since 1966, after the group ZERO dissolved and a last joint exhibition, Uecker increasingly used nails as an artistic means of expression - a material which, until today, stands in the center of his oeuvre.

This work also originates from this early period. The tense concentration of the nails in the image’s center and their dissolving towards the margin make for a strong effect. However, to Günter Uecker the varying density and the nails‘ gradient is just a means to set the stage for the play of light. "The beauty of the light will take on any appearance we wish and dream of. A spiral of eternity, made from our perception’s touches, will make us move as fast as we become invisible [..]" (translation of quote after: Mack Piene Uecker, Kestner-Gesellschaft Hanover, catalog 7, exhibited in 1964/65, p. 172).

Light and electricity continued to be one of the main subjects and natural materials such as sand and water were included in his installations, resulting in an interaction of the different elements to create a sensation of light, space, movement and time. Günther Uecker's oeuvre includes painting, object art, installations as well as stage designs and films. His origins explain his interest in the eastern European avant-garde of the 1920s and 1930s, he travels a lot, also with his students, and is likewise interested in Asian cultures and their ideas. His works can be seen in collections and large fairs in the West as well as the East. Uecker's artistic creativity reached a peak in 2000 in the prayer room he designed for the Berlin Reichstag building. Günther Uecker lives and works in Düsseldorf. [EH].