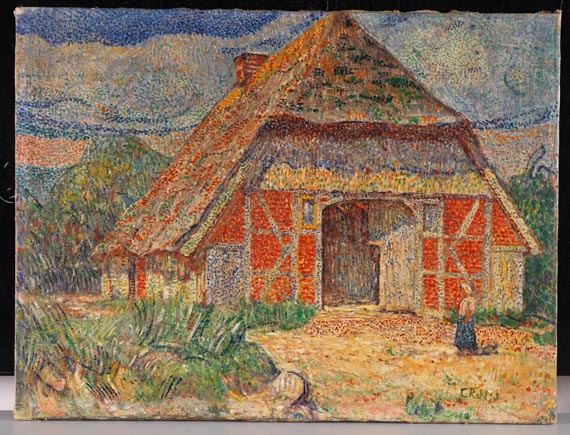 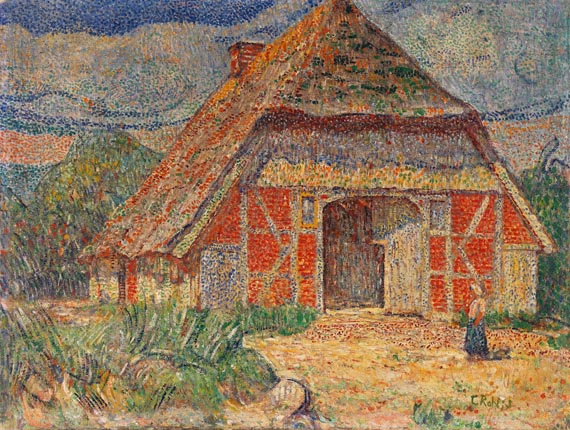 Christian Rohlfs was born in Niendorf in Holstein on 22 December 1849. During a two-year sickbed confinement from 1864-1866, Rohlfs was nursed by a doctor called Stolle, who discovered and supported the boy’s painting talents. At this time, the first drawings came into being. Upon Theodor Storm's suggestion and recommendation, Rohlfs first went to Berlin and began his studies of painting at the Grand Ducal Art School in Weimar in 1870. A leg condition aggravated so badly during the following years that one of his legs was amputated in 1873. His works found approval by the Grand Duke of Saxonia-Weimar, who supported him for many years. An independent development of his style, parallel to the School of Barbizon and French Impressionism, can be recognized as of 1888. Rohlfs was acquainted with the founder of the Folkwang Museum in Hagen/Westphalia, Karl Ernst Osthaus, through Henry van de Velde.

The collection of French contemporary art in the Folkwang museum was an unfailing source of the most varied inspirations. The following years were coined by an experimental examination with French Post- and Neoimpressionism, as well as the young German Expressionism. Rohlfs was not interested in Naturalism, but in stylization, however, on basis of the observed and perceived nature. Rohlfs was fascinated by the Cézanne‘s works, to him the art of Gauguin was the best "for a delicately sentient eye", he regards van Gogh’s "ingenious and waste". In this work Rohlfs also applied the techniques of the Pointillists. Even though he copied the mode of color application, he still manages to add his very own notion to his style. In doing so, he remains stuck with the object, however, the mode of color application has changed, and not the concept of the object in nature. He dissolves the strict separations of the color fields, as they were predominant in the works of Seurat, and thus created his own interpretation of Neoimpressionism – an airy and casual composition.

During his summer stays in Soest in 1905, he got acquainted with Emil Nolde. Rohlfs' own tendency of expressive composition corresponded to the beginning Expressionism of the 'Brücke', to which early exhibitions at the Folkwang-museum attended. After his years of study at the academy, Rohlfs' work was formed for twenty years by Impressionism, but at the age of sixty, he found a late expressionist style. Favoring tempera on canvas and paper, he also created watercolors and prints. Several honors are prove of the acknowledgement of his later works. In 1929 the Christian Rohlfs Museum in Hagen was founded on occasion of the artist's 80th birthday. After the Nazis seized power, Rohlfs was expelled from the Prussian Academy of Art in 1937, and 412 of his paintings were labeled 'degenerate' and were removed from German museums. One year later, on 8 January 1938 Christian Rohlfs died in his studio in Hagen. He was remembered as one of the most important representatives of German Expressionism in art history. [SM].