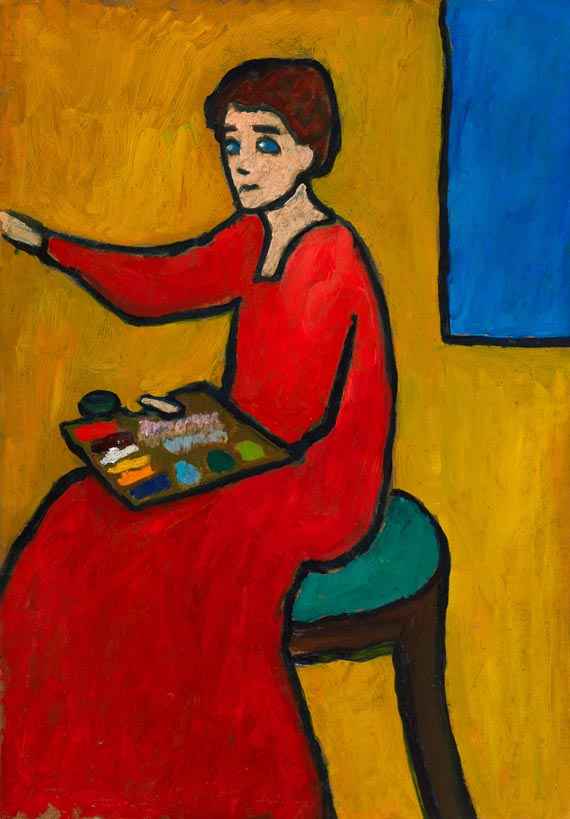 Accompanid by a confirmation from the Gabriele Münter- and Johannes Eichner-Foundation, Munich, dated 11 September 1984.

Gabriele Münter and Kandinsky worked together with Marianne von Werefkin and Alexej von Jawlensky in Murnau in 1908/09. The clear light at the foothills of the Alps and the at times unreal color contrasts were decisive for the artists. Lucid colors and a liberated and spontaneous duct were the consequence. Münter, who never entirely turned to total abstraction, sought her artistic credo in a simplified representation. The person depicted on this one could be her painting colleague Marianne von Werefkin, who was also a member of the Neuen Künstler Vereinigung München (New Munich Artists Association). Münter avoids all narrative elements in this portrait and reduces all forms to surfaces bordered in black, in favor of a stronger effect of the colors. The surfaces‘ strict geometry contribute to this effect even more. The dress’s dynamic red underlines an energetic bearing, which is almost devoid of any texture and – taking into account all we know about her – is characteristic of Marianne von Werefkin. Other picture elements have been composed similarly. Münter approaches the limits of her abstraction. The occupation with the rural tradition of reverse glass painting and print techniques, first and foremost woodcutting, can be observed. They are carried over to the large format in this work. Roundabout the same time the painting "Kandinsky und Erma Bossi am Tisch" (1912) was made, which is one the most important works from that creative period. This painting must be regarded as a both artistic and spiritual precursor thereof.

Münter was a member of the 'Neue Künstlervereinigung München' for two years and in 1911 she joined the 'Blaue Reiter', the artist group founded by Kandinsky and Marc. She was interested in Kandinsky's development towards abstract art, but her own works continued to be figurative. Her landscapes, figurative scenes and portraits show a reduction to the essential with an inclination towards humorous characterisation. When World War I broke out, Münter and Kandinsky at first moved to Switzerland. Münter, however, decided to go to Stockholm a year later, where she separated from Kandinsky. In late fall 1917 she moved to Copenhagen. She traveled a lot during the 1920s and spent some time in Munich, Murnau, Cologne and Berlin. After 1931 she spent most of her time in Murnau and Munich. In 1956 she received the Culture Prize of the City of Munich. The year 1960 saw the first exhibition of Münter's work in the US, followed in 1961 by a large show in the Mannheim Kunsthalle. The artist died in her house at Murnau on 19 May 1962. [EH]. 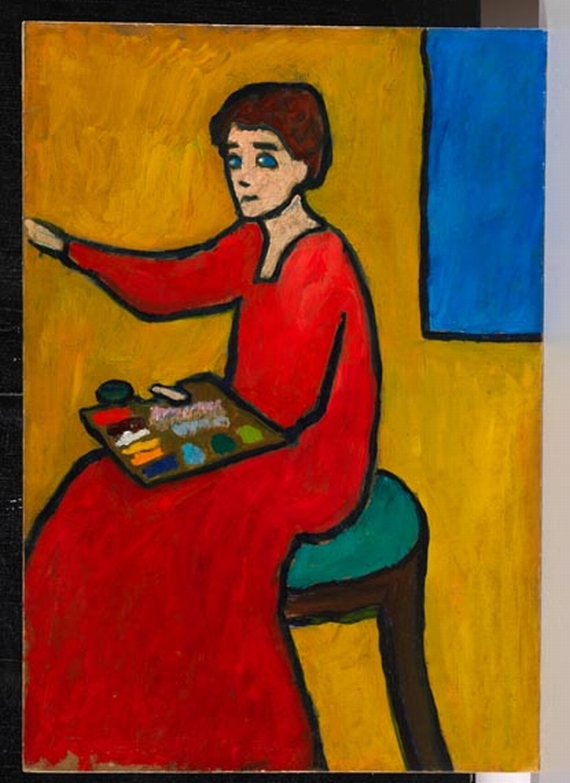