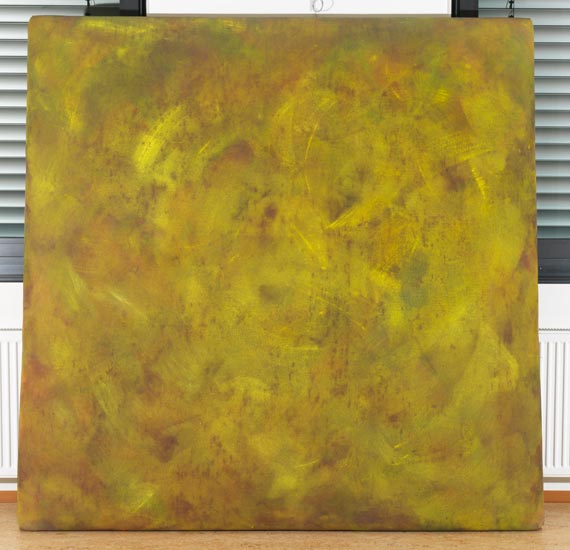 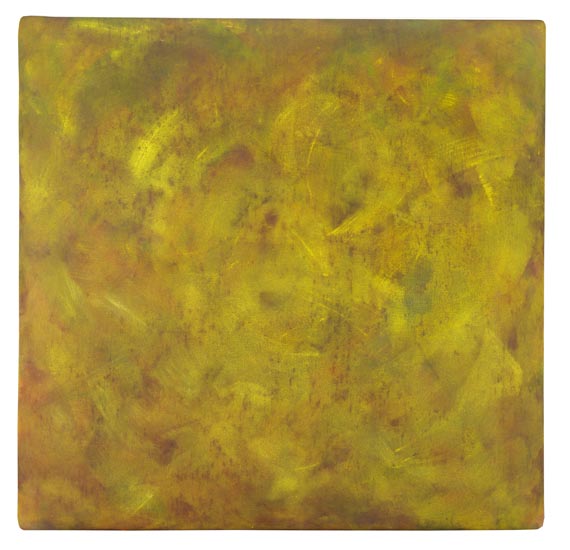 Gotthard Graubner was born at Erlbach in the Vogtland on 13 June 1930. In 1947-48 Graubner studied at the Berlin Art Academy before transferring to the Dresden Art Academy, where he studied until 1952. After moving to West Germany, Graubner continued his studies at the Düsseldorf Art Academy. Between 1955 and 1957 Graubner's pictorial language evolved away from the geometric color shapes he had preferred until then. Graubner began to try out different approaches to handling color, at first in watercolors and then on canvas. Now he gave priority to using color lavishly instead of sparingly in shapes and on the edges of his pictures as had been his habit. To enhance the spatial effect of color surfaces, Graubner began to mount picture-size color cushions on his picture and later covered them with nylon fabric. These 'Kissenbilder' ['Cushion Pictures'] were first shown at Alfred Schmela's gallery in Düsseldorf. After teaching art education at school for a year, Graubner was appointed to teach at the Hamburg Art Academy in 1965, becoming professor of painting there in 1969. Gotthard Graubner first showed work at documenta in Kassel in 1968. In 1970 Graubner added the group of 'Farbraumkörper' ['Color Space Bodies'] to his 'Farbleib' ['Color Body'] and 'Kissenbild' groups. After representing the Federal Republic of Germany at the 1971 São Paulo Bienal, Graubner took the opportunity of travelling on to Colombia, Peru and Mexico and later traveled to India and Nepal. In 1973 Graubner became a member of the Berlin Art Academy and in 1976 he became a professor for painting at the Düsseldorf Art Academy. A 1980 show of Graubner's work at the ‘Staatliche Kunsthalle‘ in Baden-Baden was a memorable occasion. In 1982 Graubner was represented at the Federal German pavilion at the Venice Biennale with a five-part ‘Color Space Body‘ ensemble.

Color Space Bodies were Graubner’s very own creation. Canvasses and synthetic wadding are mounted around the stretcher in layers. Recumbent on the ground, the artist applies several thin layers of paint, using up to 20 liters for a painting. Graubner walks around the work while it is in the process of creation, thus the paint itself becomes the subject. The rounded edges macerate the given spatiality. This way the range of nuances of the color ”Gelb” (Yellow) can be observed in this wonderful work.

In 1987 Gotthard Graubner was awarded the August Macke Prize of the City of Meschede and in 1988 the North German Art Prize. That same year Graubner was commissioned to execute two large pictures for Schloss Bellevue in Berlin, the seat of the president of the Federal Republic. In 2001/02 Gotthard Graubner was a recipient of the Otto Ritschl Prize and his work was shown at the Wiesbaden Museum. Graubner's work seems uninfluenced by current fads and trends in art. By contrast, he found his way early on and pursued it with great consistency: developing the autonomous life of color - free of any claim to represent anything other than what he himself stands for – is the paramount theme of Gotthard Graubner's work. [ EH].