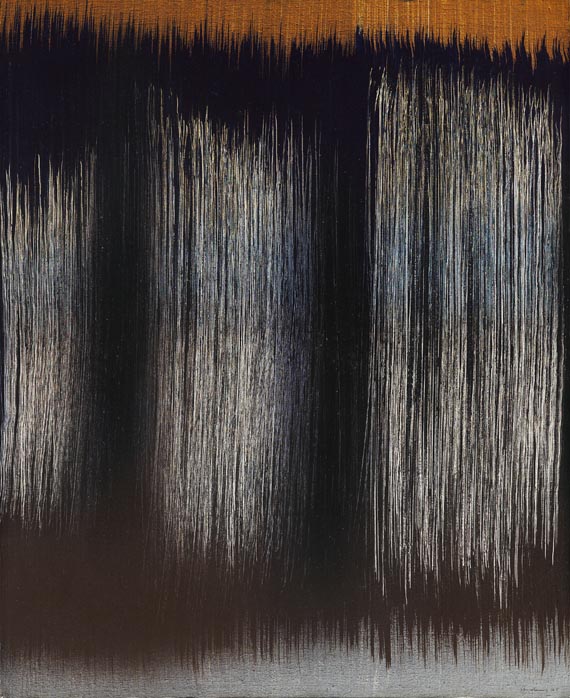 Accompanied by a photo expertise of the Fondation Hans Hartung et Anna-Eva Bergman, Antibes, dated 7 February 2007. This work is registered under the number CT HH925-0 and will be included in the forthcoming catalog raisonné.

Hans Hartung was one of the few artists who spent their entire life working in an Informel manner. He began studying philosophy and art history in 1924 at the university of Leipzig, but soon changed to the Akademie der Bildenden Künste in Leipzig and then to Dresden. He continued his training in 1928 with the painter Max Doerner in Munich. This period is reflected in his oeuvre in spontaneous, sketchy line compositions in which Hartung was guided by the inspiration of chance and analyzed the tension between the areas of color and the lines. After a lengthy stay on the Balearic island of Menorca, Hartung settled in Paris in 1932. Here he met Kandinsky, Mondrian, Miró and Calder and exhibited works at the 'Salon des Surindépendants'. At the beginning of the war Hartung joined the Foreign Legion and returned to Paris in 1945 severely injured. He became a French citizen. His work during this period is characterized by suspended areas of color superimposed by calligraphic bunches of lines. Hartung had important exhibitions in Paris, Brussels, Munich and Basle after 1949 and frequently showed works at the documenta in Kassel between 1955 and 1964. He was honored with the 'Prix Guggenheim' in 1956 and awarded an honorary membership of the Akademie der Künste in Berlin. He was awarded the Great International Prize for Painting at the Biennale in Venice in 1960.

Hartungs attained his personal style intense internal struggles. Despite all their passionate expression, his works remain a poetic distinctiveness. He does not regard his form of abstraction as a manifestation of the unconscious inner life which automatically and spontaneously unfolds on the image area. He arranges his lines and surfaces quite consciously and thus does not aim at the expression of particular moods, but rather at the realization of his image concepts. His pictures seem to have been swiftly executed, improvised and spontaneous. This impression is wrong, however, it, was intended by the artist. Each painting is based on a long series of sketches in which he develops the composition: "long, very long considerations are inevitable. The draft has too mature, the maximum must be taken out of it, it has to be taken to extremes and reduced to the essential. And in doing all of that, it is also important to maintain a fresh, spontaneous and improvised character " (translation of quote after Galerie Carintha, Hans Hartung, Klagenfurt 1981, p. 4).

Hartung published his memoirs in a book called 'Autoportrait' in 1976. One year later he became a member of the Académie des Beaux-Arts in Paris and in 1981 was awarded the Oskar-Kokoschka-Prize of the Republic of Austria. The large number of awards Hartung received for his work prove him to be an artist of international importance. He died in 1989 as one of the most important painters of the European Informel. [SM].