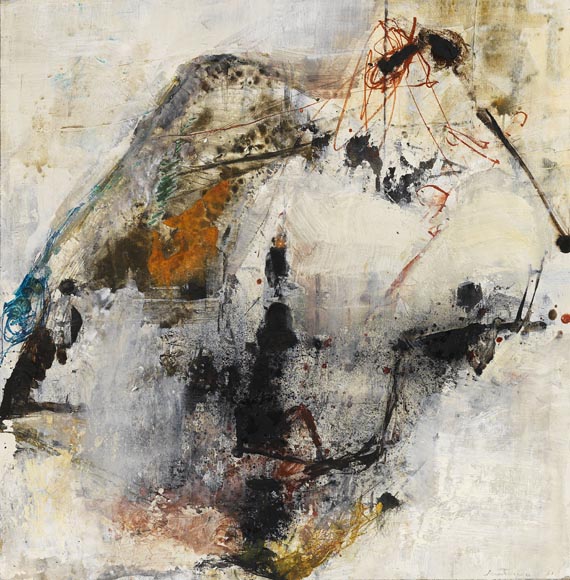 Giuseppe Santomaso was born in Venice in 1907 the son of a goldsmith. He underwent his artistic training at the Academy of Fine Arts in his home town in 1932 and two years later he was invited to participate at the Biennale. Santomaso's dealing with avant-garde art led him from the art magazine 'Verve' in the middle of the 1930s to a study trip to the Netherlands in 1937, where he studied the Impressionists and Fauves. From there he visited the world fair in Paris, where he was impressed and confused by the works of Matisse, Braque, Bonnard and Picasso, shown in the art metropolis and in 1939 he had his first exhibition at the gallery 'Rive Gauche'. During the war Santomaso was able to concentrate on his painting, illustrated in 1942 the volume of poems 'Grand Air' by Paul Eluard and participated in the art Quadriennale in Rome one year later. Santomaso was one of the founding members of the progressive Italian artist group 'Nuova Secessione artistica italiana' in 1946, a group which was later renamed 'Fronte Nuovo delle Arti'. By joining international movements the group wanted to counter a provincialisation of Italian art. This association with classical modern art is reflected in Santomaso's painting in figurative images related to Braque and Léger, before it became increasingly abstract in the 1950s under the influence of Informel. Image compositions of architectural clarity, which were infused by components of Venetian palazzi and inspired by the incomparable colors of Venice came into existence. Apart from Guiseppe Santomaso's academic teaching post at the Venetian art academy between 1954 and 1974, up until his death in 1990 he had participated 13 times in the Biennale in Venice, received three invitations to the documenta and took part in numerous national and international exhibitions. [SM]