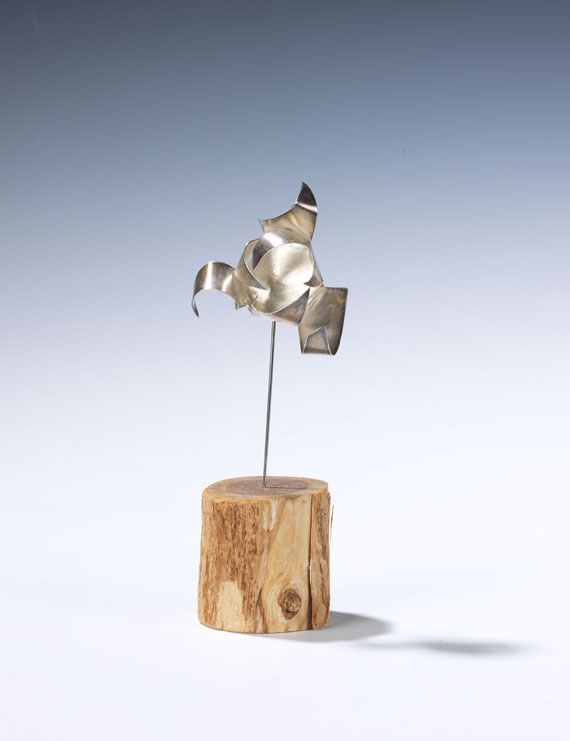 We are grateful to Birgit Mieschonz, The Estate of George Rickey and the Maxwell Davidson Gallery, New York for their kind support in cataloging this lot.

George Rickey was born in South Bend (Indiana) on 6 June, 1907. He began to study in Oxford in 1926, but went to Paris in 1929 where he finished his studies in 1930. In 1945, he made the first mobiles, inspired by the works of Alexandre Calder. He designed his works on the basis of the ideas of kinetic sculpture and ‘Naturzeit’. Unlike Jean Tiguely at his time, all of Rickey's mobiles and kinetic plastics moved without auxiliary engines. Rickey used wind energy and gravitation for his works. Rickey spent some time in Berlin from 1968 to 1969 holding a scholarship from DAAD. He received numerous awards and in 1987 became a member of the ‘Akademie der Künste’ in Berlin. In the 1990s the artist realized numerous mobiles made of stainless steel elements in which he translated the principle of a pendulum into the surrounding area. Even the small moving sculpture with a size of 60 cm "One up, one down oblique", which was created in 1975, follows these principles. The titles of Rickey's works reflect their simple construction ("Two Lines" or "Six Lines in a T") which, however, have been implemented with scientific precision. Alongside these small mobiles Rickey also created numerous free plastics which were predominantly attached to a building and in this way realized the idea of "Kunst am Bau" (construction including art). Impressive examples are the 5 meter work on the premises of Fachhochschule Fulda, University of Applied Sciences, composed of asymmetric needle-like metal arms or the kinetic plastic at the broadcast building of the TV and radio station Hessischer Rundfunk in Frankfurt am Main. The latter consists of three stainless-steel poles looking as if it was floating weightlessly. It is only the wind that makes them move and change their constellations. George Rickey died on 17 July, 2002. [SM].