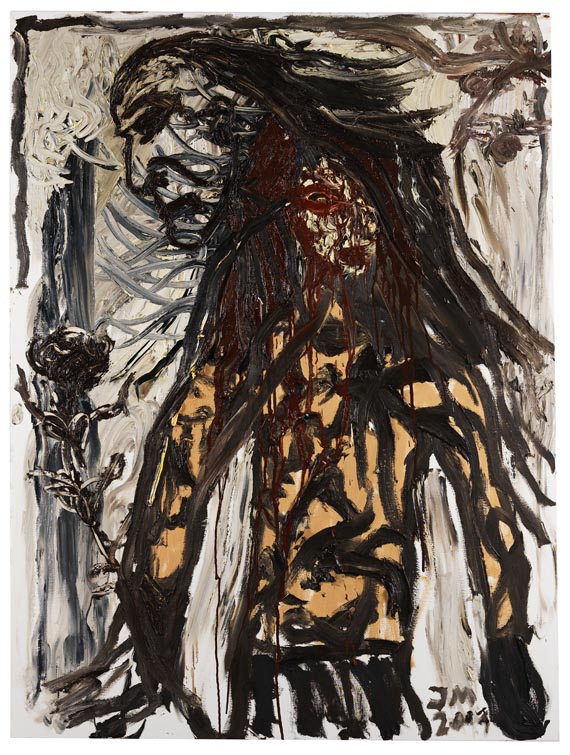 Jonathan Meese was born in Tokyo on 23 January 1970 to German and Welsh parents and grew up in Ahrensburg, Schleswig-Holstein, near Hamburg. Meese studied at the ‘Hochschule für bildende Künste‘ in Hamburg under Franz Erhardt Walther from 1993 until 1998, but dropped out before graduating. By 1997/98 he was under contract of the distinguished Contemporary Fine Arts Gallery in Berlin. In only a few years’ time, Meese produced a diverse œuvre of drawings on all sorts of available media and materials and accompanied by a great deal of exhibition activity and frequent media appearances. Complex multimedia Installations that intervene in space develop from his “Meese-Kojen” [“Meese Stalls”], which are the result of avid collecting and are accompanied by Performances and readings.

Fictitious film heroes, historical persons carrying negative or tragic baggage and figures from sagas are the cast here, but he also examines his own artist personality in form of self-portraits in various poses and masks. In 2001 Meese created the installation "La Chambre secrète de BALTHYS par Jonathan Meese", which is an homage to the Polish painter Balthus (Balthazar Klossowski de Rola), who made provoking depictions of young ladies in the 1930s and 1940s, and whom Meese considers a soul mate. Meese, the infantile agent provocateur of the contemporary art market, on and off signed his works with the initials M.B, which is short for the fusion of the two artists‘ names and the creation of the new artist personality "Balthys Meese", additionally, it can be understood as a reference to the name of Meese‘s mother, Brigitte Meese. Our work "Balthysmeese IV" was also made in this context, a janiform creature, in which Meese references motifs from the Balthus' painting "Le Rêve II" in form of the attribute of the rose and the profile to the left, creating an impulsive interpretation in his very own artistic hand.

The work Meese has been doing in recent years is the product of a great many activities in which collaborative undertakings with other artists, including Albert Oehlen and Daniel Richter, books about artists, pamphlets, illustrations and stage sets figure prominently. Meese’s works have been exhibited in innumerable solo shows and are represented in renowned public collections. The artist lives and works in Ahrensburg and Berlin. [JS].

More Information
+
Sell
Get a free appraisal for a similar object!
+
Register for
Jonathan Meese
+
Buying from A-Z
+
Contact a specialist
Share