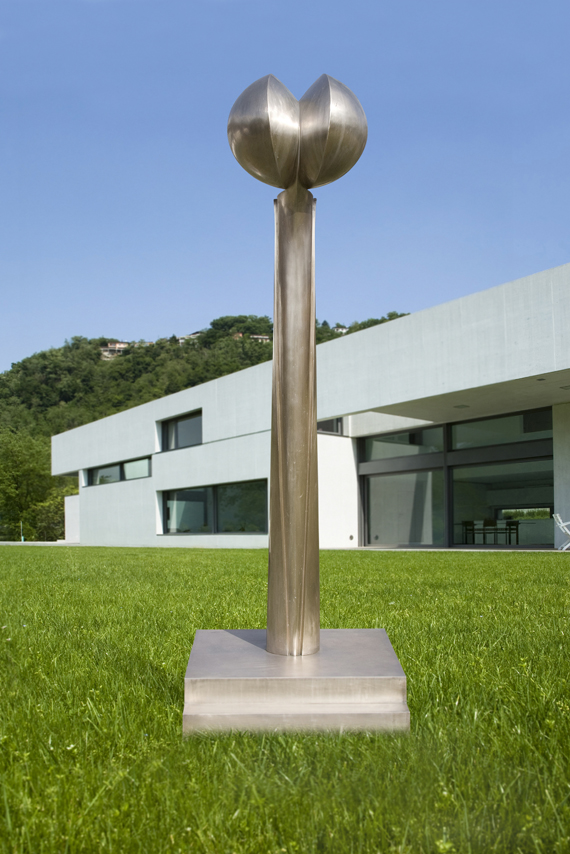 We are grateful to Dr. Dietrich Clarenbach, Gauting, for his expert advice.

Fritz Koenig studied sculpture at the Munich Akademie of Art from 1945 to 1952 at Anton Hiller´s class, interrupted by a scholarship in France in 1951. Koenig has frequently been commissioned to create sculptures for public buildings since the 1950s. He also executed small sculptures and was particularly interested in the sculptural problem of drawing groups of several figures together within one single contour. The result of these analyses was the so-called 'Mengeplastiken'. Koenig spent six months as a scholar at the Villa Massimo in Rome in 1957. Among all his impressions in the "eternal city", the motif of the quadriga was the most important. Other international successes followed, such as the artist's participation at the 29th Biennale in Venice in 1958 and at the II. documenta. The very same year the gallery Günther Franke showed a first one-man show. The first exhibition of his works took place in the USA at the gallery Staempfli in New York in 1961. In 1964 Koenig was appointed to the chair for plastic design at the Technische Universität Munich. The same year he participated in the documenta 3 in Kassel and the XXXII. Biennale in Venice. From 1967-1971 Koenig was working at the 'Große Kugelkaryatide' commissioned by the Port Authority New York for the fountains of the Trade Centre in Manhattan. Already in 1969 Koenig became a member of the Akademie der Künste in Berlin and the Bayrische Akademie der Schönen Künste in Munich.

Fritz König continued the development of his caryatide motifs on the basis of his large-sized bronzes from the groups "Flora" and "Mona", which he began working on around 1970. Mona II balances a blossom-like bowl on a tapering pole. The concept of carrying, loading and hovering is one of the main themes in Fritz Koenig's work.

The Munich Staatsgalerie arranged an extensive retrospective exhibition in 1974. The Städtisches Museum of Regensburg staged an exhibition of the artist's work in the Gothic Minoritenkirche in 1979. The monument of the Federal Republic of Germany in the former concentration camp Mauthausen was erected in 1983. This was followed by exhibitions at the Neue Pinakothek in Munich (1988), at the Akademie der Künste in Berlin (1989) and at the Galerie Pels-Leusden in Berlin. Prof. Fritz Koenig and his wife Maria donated their collection to the city of Landshut in 1993. Fritz Koenig was awarded the "Bayerischer Maximiliansorden für Kunst und Wissenschaft" in 1993. His monument to the victims of the terrorist attack at the Olympic Games in 1972 was erected in the Munich Olympiapark in 1995. The "Skulpturenmuseum in Hofberg" opened in 1998 with the retrospective exhibition "Fritz Koenig. Skulptur und Zeichnung" 1942 - 1997". In co-operation with the Bayerischer Rundfunk the director Percy Adlon produced the film 'Koenigs Kugel. Der deutsche Bildhauer Fritz Koenig im Trümmerfeld von Ground Zero' in 2001. [EH].