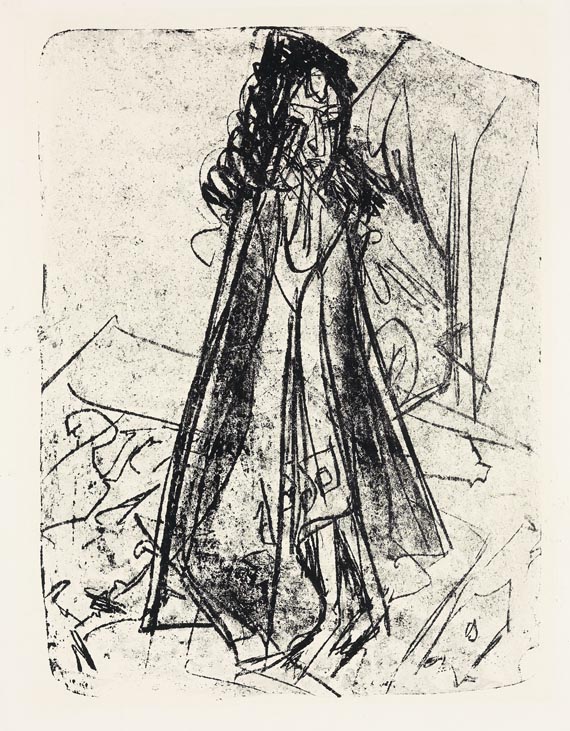 This work is documented in the Ernst Ludwig Kirchner archive, Wichtrach/Bern.

Kirchner studied architecture in Dresden where he met and worked with Fritz Bleyl, Erich Heckel and Karl Schmidt-Rottluff. After finishing his studies, however, he opposed his father's wishes and decided to become a painter. The intense artistic and intellectual relationship between the four artists soon led to the formation of the artist group 'Die Brücke' in 1905. The artists began working on the ‘Viertelstundenakte' (15 Minutes Nudes ), drawings of nude models in the studio or in open nature. Due to the encounter with Italian Futurist works, the group's painting style changed and became ‘tougher' around 1910. Kirchner studied the sculptures at the museum of ethnology in Dresden, which influenced his own wood sculptures. In 1911 Kirchner moved to Berlin, where he discovered an abundance of new motifs. Which he painted in a simplified manner, with sharply contoured forms, expressive features and clashing colors. The big city paintings became incunables of Expressionism and made Kirchner one of the most important German artists of the 20th century. The outbreak of World War I and the following years were a turning point in his life. The war experiences and military service caused an existential angst and led to illness and long stays in sanatoriums. The more remarkable was his artistic production of that time. He executed self-portraits and graphic images of the sanatoriums, which count among the highlights of his œuvre.

In this very scarce sheet of the "Nachtwandlerin" (Sleepwalker ) from 1916, Kirchner kept the expressive duct of his Berlin big city pictures, however, with his almost manic stroke he depicted not one of those adorned ladies on Potsdam Square, but the sleepwalking woman that seeks shelter behind a cape, confronting the observer drifting and with messed up hair. The mentally strongly marked Kirchner, affected by the experiences of war, spent most of the year 1916 in the sanatorium in Königstein in the Taunus mountains. The institution was led by the Dr. Oskar Kohnstamm, an expert in war neuroses and hysteria. However, not even there did the artist manage to find some peace, but he interrupted his stays in order to go to Berlin where he continued his artistic activities. Kirchner was manically driven, as a diagnosis from the same year proved. “Despite his generally weak physical constitution, Mr. Kirchner is in a state of nervous excitation, showing symptoms of insomnia and abuse of sleeping pills.“ (translation of quote after E.W. Kornfeld: E.L. Kirchner. Nachzeichnung seines Lebens, Bern 1979). The sheet "Nachtwandlerin" unusual both in terms of the topic as well as its artistic qualities, can be regarded as both a personification of sleeplessness and the drivenness by an inner uneasiness. Thus it can be interpreted as a metaphoric self-portrait of the unresting artist.

In 1917 Kirchner settled in Frauenkirch near Davos. The big city scenes were now replaced by mountain landscapes and scenes of rural life. Around 1920 his painting style calmed down, his paintings had a carpet-like two dimensionality. In 1923 Kirchner moved to the ‘Haus auf dem Wildboden' at the entrance of the Sertig Valley where he lived and worked until he committed suicide in 1938. [JS].