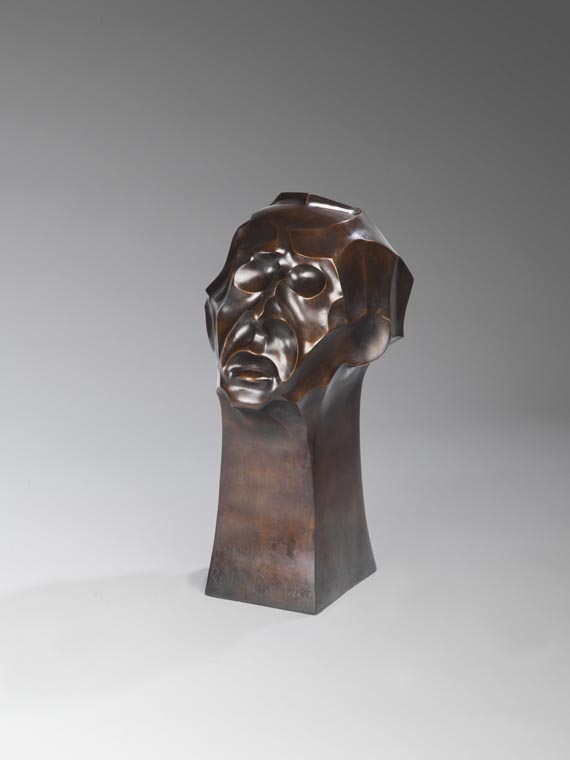 After his school years in Dresden and Halle William Wauer, son of a Thuringian priest, took up his studies of art at the Akademie in Dresden in 1884. He continued his studies at the academies in Berlin and in Munich. From 1888 on an intensive part of his life followed, during which he lived at al. in San Francisco, New York, Vienna, Rome, Leipzig and Dresden. Wauer worked as a publisher, art critic feature editor and illustrator, published the monthly journal ‚Quickborn'
and also spent this time making designs for the advertising departments of companies such as the Lingerwerke, for which he designed the ‚Odol'-advertisements. After 1900 he turned increasingly to the theatre and attended the director's class at the Schauspielschule in Berlin in 1905 and produced with a huge success Herwarth Walden's pantomime ‚Die vier Toten der Fiametta' in 1911. This production is regarded as the first highlight of the artist group ‚Der Sturm's' theatrical work, which Wauer joined in 1912. He also began directing films: 'Richard Wagner' in 1913, 'Der Tunnel' in 1914/15 and 'Peter Lump' in 1916. Then the artist turned to painting, graphic arts and sculpture, presenting his works regularly from 1918 onwards at the 'Sturm'-Galerie. He was especially appreciated as a portraitist - H. Walden's bust is regarded as an incunable of expressionistic statuary. William Wauer's sculptures were characterised by a dramatic rhythm of movement and an expressively moved, ornamental surface design.

Until 1924, when the 'Sturm'-circle slowly began dispersing, Wauer also worked for journals, wrote books and taught at the 'Sturm' art school. In 1924 Wauer founded the artist group 'Die Internationale Vereinigung der Expressionisten, Kubisten, Futuristen und Konstruktivisten', which he headed until it was forbidden in 1933. Classified as ‚degenerate' by the National Socialists, the artist was banned from painting in 1941. After the war William Wauer participated regularly in exhibitions with his sculptures, paintings and graphic works, worked as a lecturer at the West-Berlin Volkshochschule and was member of the board of the 'Verband der Berliner Bildenden Künstler'.