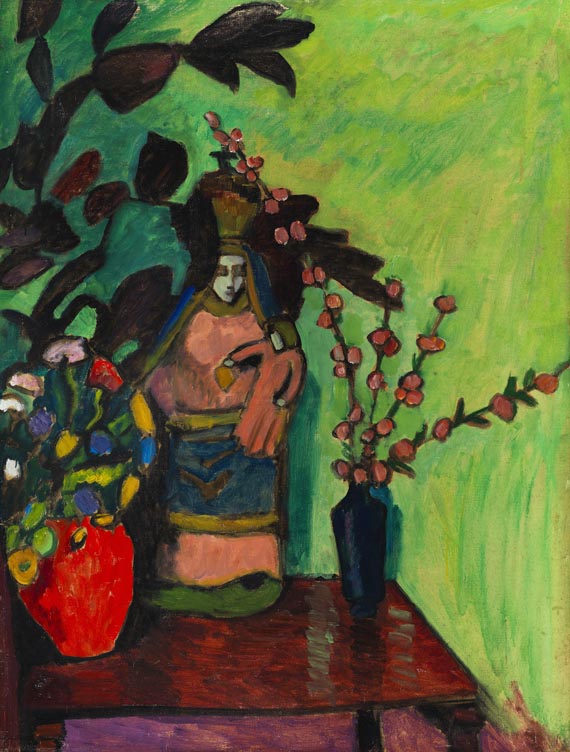 Accompanied by a confirmation from the administrator of the will of Dr. Johannes Eichner, Joachim von Seydlitz, Gauting, dated 10 May 1987.
If desired by the future owner, the work can be presented to the curators of the catalog raisonné of paintings by Gabriele Münter on 11 May 2011.

Gabriele Münter received her first art lessons at the 'Damen-Kunstschule' (Ladies Art School) in Düsseldorf and then attended the Society of Woman Artists as M. Dasio's and A. Jank's pupil. Then she went to Munich where she visited the private art school 'Phalanx' which was run by Wassily Kandinsky. In 1904 Münter and Kandinsky began travelling together: to Holland, Italy, France - where they met Rousseau and Matisse - and elsewhere. Stylistically she now distanced herself from Impressionism and her works began showing Fauve and Expressionist influences. In 1908 she and Kandinsky began leading a calmer life in their apartment in Munich. They often met with Klee, Marc, Macke, Jawlensky and Marianne von Werefkin. The country house Münter bought in Murnau provided an ideal working environment. In 1909 the artist began painting glass, a medium which would later also be adopted by Kandinsky, Marc, Macke and Campendonk. Münter was a member of the 'Neue Künstlervereinigung München' for two years and in 1911 she joined the 'Blaue Reiter', the artist group founded by Kandinsky and Marc.

Moving to the idyllic town of Murnau at the foothills of the Alps, into the so-called "Russenhaus" (House of the Russians), marked a both personal and artistic turning point for Gabriele Münter. As early as in 1908, when she met Kandinsky, Werefkin and Jawlensky on excursions, she wrote in her diary: "[..] After a short time of pain I have made a great leap forward - from copying nature – more or less impressionistic – to feeling the content, to abstraction – to delivering an essence." (Translation of quote after: Annegret Hoberg, in: Der Blaue Reiter im Lenbachhaus München, München 1991, no page, cat. no. 58). From a steady situation in life and inner well-being as well as personal liberation she made numerous important works in Murnau. Works that demonstrate the artistic breakthrough and her newly discovered means of artistic expression. It was in those creative days that Münter made this work "Stillleben mit Madonna" (Still Life with Madonna). In this work her new style becomes obvious: the ability to reduce what she sees to the quintessential forms and to use colors freely and uncoupled from nature‘s impression in their purest form. She encloses the hardly graded color fields with narrow black contours and thus creates a strong composition of great closeness and increased expression.

She was interested in Kandinsky's development towards abstract art, but her own works continued to be figurative. Her landscapes, figurative scenes and portraits show a reduction to the essential with an inclination towards humorous characterisation. When war broke out, Münter and Kandinsky at first moved to Switzerland. Münter, however, decided a year later to go to Stockholm, where she separated from Kandinsky. In late autumn 1917 she moved to Copenhagen. She travelled a lot during the 1920s and spent some time in Munich, Murnau, Cologne and Berlin. After 1931 she spent most of her time in Murnau and Munich. In 1956 she received the Culture Prize of the City of Munich. The year 1960 saw the first exhibition of Münter's work in the US, followed in 1961 by a large show in the Mannheim Kunsthalle. The artist died in her house at Murnau on 19 May 1962. [ATh].