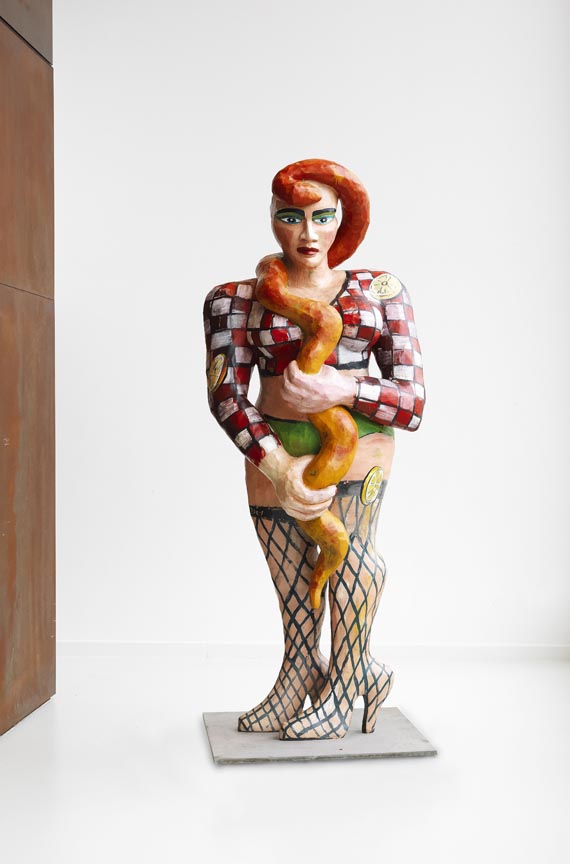 Elvira Bach attained international fame as a representative of the “Jungen Wilden” (Young Wild Artists). She attended the ‘Staatliche Glasfachschule’ Hadamar from 1967 to 1970. She moved to Berlin two years later where she studied painting under Hann Trier at the ‘Hochschule der Künste’. She financed her studies by working as a property master at the ‘Schaubühne am Halleschen Ufer’. In 1982 Bach spent several months as an Artist in Residence in Santo Domingo in the Dominican Republic, an experience that inspired and influenced her work considerably. Just 29 years old, Bach was invited in the same year to exhibit at the documenta VII. Numerous exhibitions at museums and art societies followed. Instead of Rationality, Bach expresses subjective themes in a fleetingly vigorous, energetic, even aggressive pictorial language, which is expressed in a sensually bright palette and clearly defined sharp-edged forms. The recurring subject is the woman in her sex-determined existence, usually with similar physical features, the resemblance of her neo-expressionist female portraits with herself is unmistakable. She began painting her first real self-portraits in 1978 - often disguised as still-lifes with collections of utensils and accessories with which she defines herself as a woman. The snake became an important feature in her work during the first half of the 1980s. Erotic associations increasingly determined her work. This strongly sensual energy was transformed around the end of the 1980s towards a more reserved style. "I know that I have lived many things to the full", said Elvira Bach in retrospect - for her the necessary experience in order to continue her work as an artist in a more relaxed manner and within a new area. [DB].