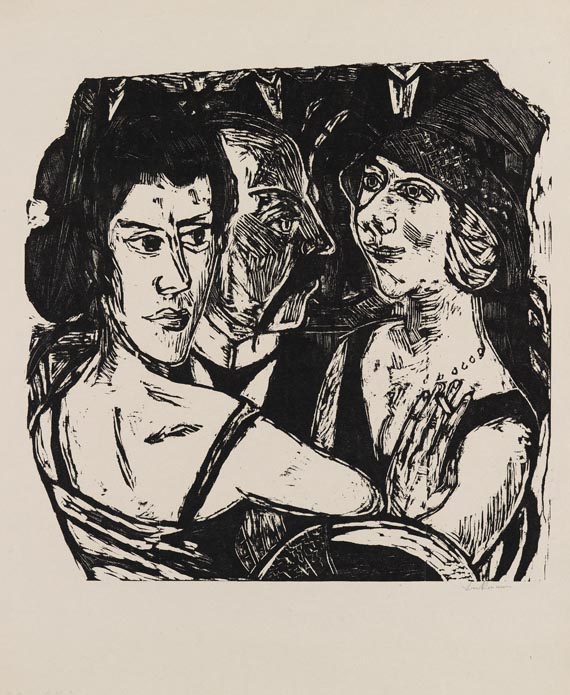 In spite of his family's opposition, Beckmann managed to get their permission to become a painter after finishing school. He went to the Großherzogliche Kunstschule in Weimar from 1900 to 1903 where he studied mainly under the Norwegian landscape painter Carl Frithjof Smith. After his graduation and several trips to Paris, Geneva and Florence Beckmann settled in Berlin in 1907 where he joined the 'Berliner Sezession'. At the outbreak of the First World War Beckmann volunteered and served in East Prussia and Flanders. Discharged in 1915, Beckmann moved to Frankfurt am Main. Beckmann’s early style is under the influence of German Impressionism, particularly that of Lovis Corinths, then the war experience take him to an expressionist style that was close to the art of New Objectivity. Beginning in the 1920s, the individualism of his style expressed itself in his intense occupation with the object world, which is reflected in an Expressive, graphic structure. Beckmann's prevailing subject was the lonely, threatened man in an apocalyptic world.

This woodcut can definitely be called one of Max Beckmann’s most outstanding woodcuts. The trio with Johanna Loeb and Elsita Lutz is placed in the very foreground. The composition is closed by the view of the back of Johanna Loeb seated in left. How important the focus on the three people is, is shown by the treatment of the wooden block in second state, in which he reduced the originally straight side margin to the contours of the two seated persons. The large wooden block, presumably jointed from three elements as the seams clearly indicate, is used by Max Beckmann for a composition of a strange and rare poignancy. Another interesting point is the posture of the faces. Each person looks in another direction. Despite their physical closeness, there is a lack of commonality. Johanna Loeb was portrayed by Beckmann several times. In 1939 she emigrated to Brazil. The person across from her is Elsita Lutz from Argentina, she and Johanna Loeb are also to be found on the double portrait lithograph "Zwei Frauen" from 1922. Just as Ernst Ludwig Kirchner, Max Beckmann also enrich expressionist woodcut art with his extraordinary works and substantially shaped German print art in the first half of the 20\up5 th century.

He taught at the Städelschule in Frankfurt am Main until 1933. With the success of the National Socialists the artist was increasingly defamed and finally dismissed from his teaching post. His works were removed from public collections in Germany. Political pressure forced him to emigrate to Holland in 1937. Here he was also restricted by the political situation, however, and an invitation to Saint Louis as a guest professor in 1947 was a welcome occasion to emigrate to the USA. This post at the Washington University School of Fine Arts was followed by teaching posts at the University of Colorado in Boulder in 1949, the Brooklyn Museum Art School in New York and Mills College in Oakland, California in the summer of 1950. In his late work this view culminates in large symbolical and mythological triptychs. Max Beckmann was awarded the Carnegie Prize (1929), the first prize at the international 'Golden Gate' exhibition (1939) and the Conte-Volpi Prize at the XXV. Biennale in Venice (1950) as well as an honorary doctorate by Washington University in St. Louis. Max Beckman died on 27 December 1950 in New York. [KD].