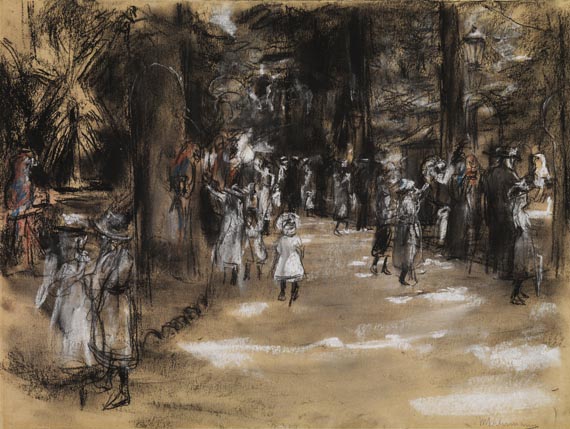 This work's authenticity has kindly been confirmed orally by Drs. Margreet Nouwen, Berlin. It will be included into the forthcoming catalog raisonné of pastels, watercolors and gouaches.

Max Liebermann began capturing his immediate environment on paper at the age of nine. When the renowned Berlin painter Carl Steffeck saw drawings by the fifteen-year-old he recommended that the boy's talent should be encouraged as much as possible - much against his parents ideas. Steffeck gave Liebermann his first drawing lessons and encouraged him to attend the Weimar Akademie. Liebermann studied in Weimar for three years until 1872. A trip to Düsseldorf in 1871 took the young artist to Mihály Munkácsy, a Hungarian painter who lived here. Liebermann was inspired by Munkácsy's Realism. Still under this impression, Liebermann painted his first large painting, 'Die Gänserupferinnen' (Girls plucking Geese). The unadulterated realism of this work, which was much rejected among the critics, was to become typical of Liebermann's art. He spent the years 1873 to 1878 in Paris and the artist colony of Barbizon. Here he studied the art of Millet, whose paintings of farm workers had a strong influence on him. A first sojourn in Holland in 1871 was followed by regular trips to the Netherlands, where he discovered suitable motifs for his most important works. His striving to elevate the life and work of the simple man to the realms of art in an unpretentious simplicity was not generally accepted. Liebermann continually fought for acceptance. Only after turning towards motifs and scenes of bourgeois life did he become the celebrated and sought after painter of the liberal bourgeoisie of the turn of the century. He spent the years 1878 to 1884 in Munich and then returned to his native town Berlin in 1884. Liebermann was an important personality not only as an artist but also as an art politician. At the beginning of 1892 he was a member of the 'Erste Sezession Deutschland', an organization which he chaired in Berlin from 1898 to 1911.

The charming scene of a lively boulevard with parrots on display between the trees was taken on by two German artists. From around 1900 to 1902 it was both Max Liebermann as well as Max Slevogt who had an interest in the subject. Liebermann in the Netherlands and Slevogt in the zoo in Frankfurt am Main. Liebermann painted the parrot man as early as in 1881. Around 1900 he took on the topic again, now focussing on the parrot boulevard in the Amsterdam zoo. "After Liebermann had made several studies of the guardsman [..], he became interested in the boulevard itself, its depth, bathed in the warm rays of the afternoon sun, heightened with the colorful spots of the parrots and enlivened by strollers in light and colorful dresses. At first he executed several pastel studies [..] then he started to work on the painting inspirited by an energy that made him put on a firework of colors" (Erich Hancke, Max Liebermann. Sein Leben und seine Werke, Berlin 1914, p. 403). In our preparatory pastel, which possesses a coloring that develops a language of its own, it is the pictorial elements that make for the work’s basic tone. Liebermann made great accomplishments in pastel painting, he sought new ways of expression and emphasizes the pictorial effect rather than the usual painting-like effect.