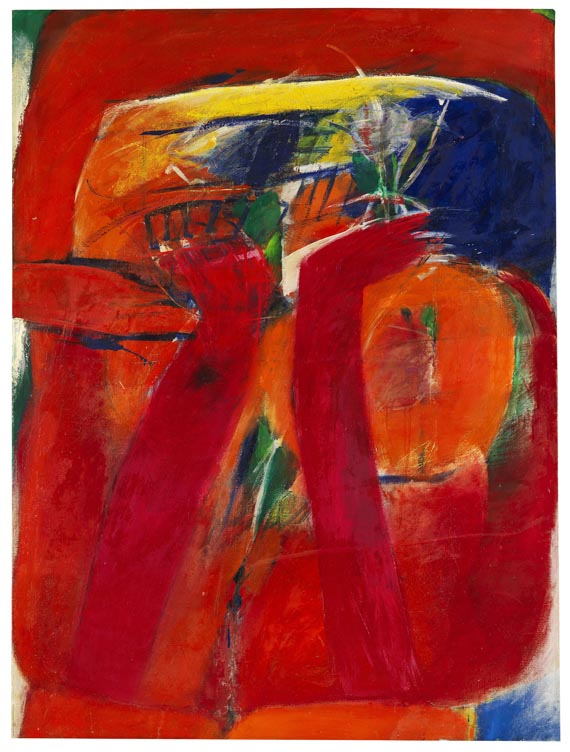 Horst Antes was born in Heppenheim on the Bergstraße on October 28, 1936. After he had completed grammar school he studied under the important woodcutter HAP Grieshaber at the Akademie der Bildenden Künste in Karlsruhe from 1957 to 1959. Already in 1959 the artist's work was honored with two prizes, the art prize of the city of Hanover and the Pankofer prize on the occasion of the German Youth Art prize. In his early paintings Antes sought a path somewhere between figurative painting and the Informel. One of his most important role models was Willem de Kooning. Around 1960 Antes discovered his 'Kopffüßler' (literal translation: Head-Footer), a form which preoccupied the artist in numerous variations and artistic techniques.

On the way to his most characteristic artistic creation, the “Kopffüßler“, Antes made color-intensive paintings between around 1959 and 1963 that already show a certain occupation with figuration. However, he then still possessed forms of expression that show his links to the Informel. He made female figures with red-orange heads, at first sight seeming rather undefined and abstract. Through simplified arms, hands and eyes as pars pro toto human figures can clearly be identified. Accordingly our work “Figur Flora“ from 1960, a cinnabar female figure with large breasts who seems to rest her head on both hands. The one large blue eye already hints at the later figure of the “Kopffüßler“ which is solely depicted from a side-face perspective, even though “Figur Flora“ is still in a frontal perspective. In his very own charming manner Antes lets “the figure’s body shapes and extremities grow from the seemingly amorphic images […].“ (Götz-Lothar Darsow, Leib und Kopf, Auge und Haut, in: ex. cat. Hanover 2002, p. 106).

By 1963 his 'Kopffüßler' was fully developed in its stylistic and contextual premises and became also compulsory for his sculptural work, which began the very same year. The artist was given several scholarships and awards in the 1960s, including the Villa-Romana-Prize in Florence in 1962 and the Villa Massimo scholarship in Rome in 1963. Three years later, aged only 29, Antes accepted a teaching post at the Akademie in Karlsruhe. This was followed by a post as a professor also in Karlsruhe which he held from 1967 to 1973, as well as a one-year guest-professorship at the Staatliche Hochschule für Bildende Künste in Berlin. The artist resumed teaching at the Akademie in Karlsruhe in 1984 and continued teaching there for another 16 years. The regional capital awarded him the Hans-Molfenter-prize in 1989. Since 1990 the artist has been living and working in Karlsruhe, Florence and Berlin. Antes' oeuvre includes not only paintings and graphic art, but also sculptures in public spaces. His works are exhibited throughout the world and are represented in all of the most important German collections, et al. at the Kunsthalle Hamburg, the Museum Ludwig in Cologne or the Nationalgalerie Berlin. [CB].